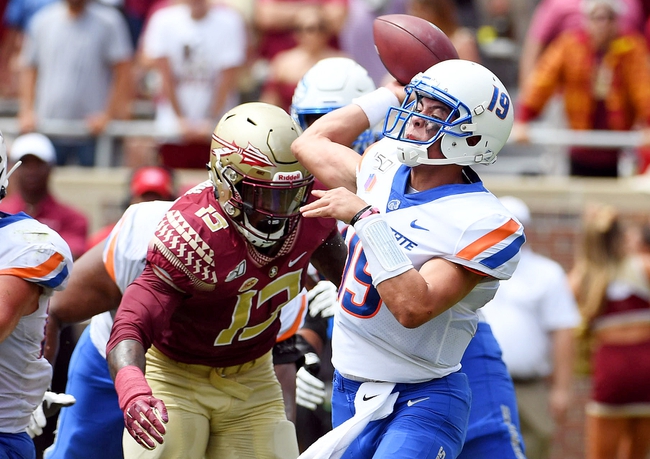 The Air Force Falcons will look for a win to build on their 2-0 start to the year after a 30-23 overtime win over Colorado last time out. Donald Hammond III has thrown for 155 yards, 2 touchdowns and an interception on 58.3% passing while Kadin Remsberg has 208 rushing yards and 3 touchdowns to lead the Falcons in rushing and Taven Birdow has 147 rushing yards this season. Geraud Sanders has 5 receptions for 97 yards and a touchdown while Benjamin Weaters has 92 receiving yards and a touchdown. Defensively, Jeremy Fejedelem has a team-high 16 tackles, including 13 solo tackles and 1.5 sacks. As a team, Air Force is averaging 454 yards of total offense and 39 points per game this season.

The Boise State Broncos will look to remain undefeated after improving to 3-0 on the year with a 45-10 win over Portland State in their last outing. Hank Bachmeier has thrown for 927 yards, 4 touchdowns and 3 interceptions on 61.8% passing while George Holani leads Boise State in rushing with 216 rushing yards and Robert Mahone is right behind with 215 rushing yards this season. Khalil Shakir leads Boise State’s receiving group with 17 catches for 237 yards while CT Thomas has 164 receiving yards and John Hightower has 150 receiving yards with both Thomas and Hightower each logging a pair of touchdown grabs this season. Defensively, Ezekiel Noa leads the Broncos with 18 tackles, including 12 solo tackles, while Curtis Weaver has 15 tackles, 10 solo, as well as a whopping 6 sacks through 3 games this season. As a team, Boise State is averaging 516.3 yards of total offense and 31.7 points per game this season.

The Broncos have been impressive early on and the blue turf is one of the harder environments to go on the road and get your bearings and keep your composure. However, I doubted Air Force against Colorado and that came back to bite me as the Falcons stepped up their game. Boise State has won the last two meetings by a combined 35 points, but Air Force has won two of the three meetings at Albertsons Stadium outright. Air Force also has a history of keeping it within the number against Boise State, so I’ll take a stab at Air Force and the points here.