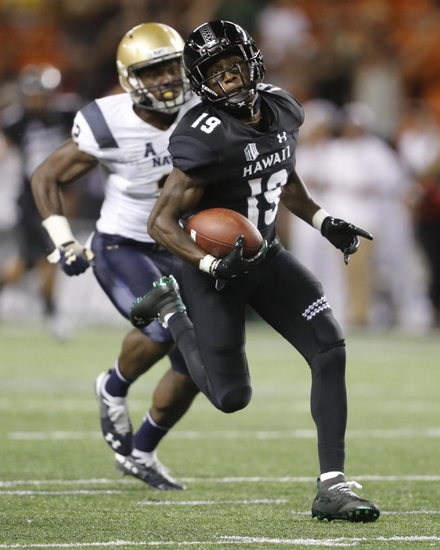 The Hawaii Rainbow Warriors come to the mainland to take on No. 14 Boise State at Albertsons Stadium in Boise in a battle of the Mountain West Conference’s two first place teams.

Hawaii has always been known as a strong team on the islands but when it comes to the mainland, it sometimes struggles. That point is clearly made when considering the Hawaii is 9-35 on the road since 2012.

Does this year’s team follow that trend? It’s tough to say. The Rainbow Warriors were blown out at Washington 52-20 a month ago, but traveled to Nevada for the Mountain West Conference opener and crushed the Wolf Pack 54-3. At this point it is impossible to tell if this Nevada team that beat Purdue in the season opener has fallen flat or if Hawaii has figured out how to win after a six hour flight west.

There are very few questions surrounding the 14th-ranked Broncos. They are one of just 16 remaining undefeated teams in the FBS and hold their highest national ranking since they were No. 13 in 2016. Boise State lost to Wyoming that next week. Interestingly enough, Boise State has never lost to Hawaii in Idaho and holds a 12-3 all-time record against the Rainbow Warriors. The three losses all came in Hawaii.

So does Hawaii have a chance on Saturday? There certainly is a chance, despite what all the previous stats say. Does Hawaii have a chance to stay within 13 points of Boise State? Absolutely. Incredibly, the Broncos have only knocked off two teams this season by more than 13 points with a seven-point win against Marshall and an 11-point victory against Air Force -- both at home. And with Hawaii’s fourth-ranked passing attack and 25th-ranked scoring offense in FBS, it makes sense that the Rainbow Warriors will be able to put up enough points to keep it close.

It’s going to be cold with the game-time temperature in the mid-50s dropping to the 40s throughout game time which typically hurts Hawaii, but it was 39 degrees at kickoff at Nevada and that didn’t seem to be a problem. It was also just Hawaii’s second road win in Reno.

This game just has a feeling of being a bit closer than might be expected originally. It will be played on that hideous blue turf in Boise, which is a negative, but everything else points to an entertaining matchup that will end with seven points separating the two teams, not two touchdowns. Go with Hawaii plus 13.