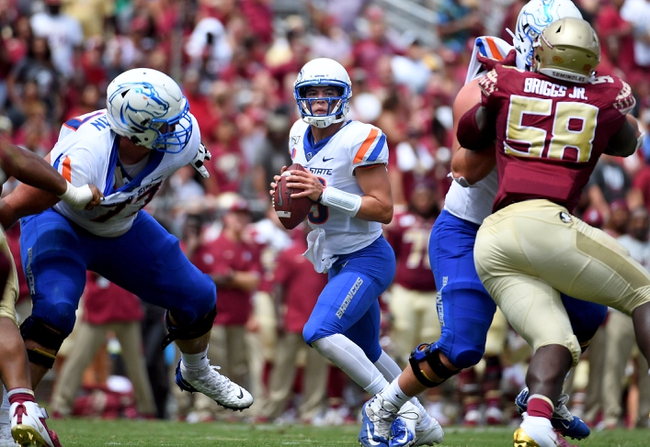 The Marshall Thundering Herd and the Boise State Broncos meet in a week 2 non-conference college football matchup from Albertsons Stadium on Friday night.

The Marshall Thundering Herd will look to carry over their series opening victory coming in the form of a 56-17 win over VMI last time out. Isaiah Green threw for 238 yards, 4 touchdowns and an interception on 18 of 28 passing while Alex Thomson completed 6 of 7 pass attempts for 102 yards and a touchdown. Tyler King led the Herd’s ground attack with 75 rushing yards while Sheldon Evans turned his 7 carries into 56 yards and Brenden Knox turned in a pair of rushing touchdowns. Corey Gammage led Marshall with 5 grabs for 82 yards and a touchdown while Artie Henry had 56 receiving yards and a TD and Broc Thompson had a pair of catches for 54 yards. Willie Johnson also logged a receiving score for Marshall in the win. Talik Keaton added a 67-yard punt return for a touchdown while the Herd combined for three sacks and Nazeeh Johnson and Steven Gilmore each had a team-high 3 tackles.

The Boise State Broncos will look to build off of a solid 36-31 victory over Florida State in their season opener last time out, storming back from 18 points down to defeat the Seminoles at home. Hank Bachmeier threw for 407 yards, a touchdown and an interception on 30 of 51 passing while Robert Mahone had a team-high 142 rushing yards and a pair of rushing touchdowns. George Holani had 70 rushing yards on 14 carries while CT Thomas caught 5 passes for a team-high 103 yards and Khalil Shakir had a team-high 8 grabs for 78 yards and a touchdown. Defensively, Boise State combined for four sacks while Jalen Walker and Kekaula Kaniho each logged a team-high six tackles.

I get Boise State being favored at home, as they were impressive in rallying from 18 down to beat Florida State on the road. However, while that win was impressive, I don’t think as highly of Florida State as others might and while VMI isn’t the hardest opponent in the world, the Herd showed that they’re more than capable offensively and can put points on the board in a hurry when called upon. I think that Boise State probably wins this game at home, but asking for double digits is a lot and I think that Marshall’s more than capable of keeping this one to single digits, so I’ll take a shot at Marshall and the points here.