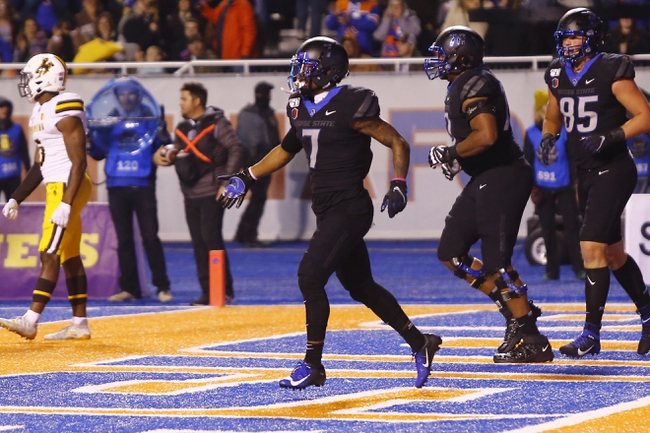 The New Mexico Lobos are set to visit Albertsons Stadium in Boise, Idaho for a Mountain West Conference clash against the Boise State Broncos. The New Mexico Lobos come into this matchup with a 2-7 record, and they will be looking to rebound after dropping their recent road game against the Nevada Wolf Pack, 21-10. Sophomore QB Tevaka Tuioti had a solid game through the air for the Lobos as he connected on 19 of his 36 pass attempts for 237 yards. Senior RB Ahmari Davis had a productive game on the ground for the Lobos as he ran for 80 yards and a TD on 15 carries.

The Boise State Broncos come into this matchup with an 8-1 record, and they will be looking to continue their success after winning their recent home game against the Wyoming Cowboys, 20-17 in OT. Sophomore QB Chase Cord struggled to get much offense generated through the air for Boise State as he connected on 19 of his 30 pass attempts for 190 yards, 1 TD, and 1 interception. Sophomore WR Khalil Shakir was the top target for Cord and the Broncos as he hauled in 7 catches for 70 yards.

The Boise State Broncos were solid on the defensive side of the ball against the Wyoming Cowboys as they held them to 17 points and a total of 283 yards of offense. Junior LB Riley Whimpey led the way for the Boise State defense with 12 tackles, 2 TFL, and 2 pass deflections. Junior LB Curtis Weaver was able to get into the Wyoming backfield a handful of times as he contributed 5 tackles, 2 TFL, and 2 sacks.

The Boise State Broncos have been playing without their starting QB the last few games, but this should be a game where the offense gets back on track as New Mexico ranks 120th in college football in points allowed. New Mexico has failed to stop any aerial attack this season as their defense is allowing an average of 340.4 passing yards per game, and Boise State has too many weapons between John Hightower and Khalil Shakir for the Lobos to figure out. New Mexico will look to run the ball with Ahmari Davis as he has run for 823 yards and 7 TDs, but he will struggle to find room against a Boise State defense that is allowing an average of 118.1 rushing yards per game. Boise State will have the Lobos at home, and the blue turf should help lead the Broncos to an easy win.