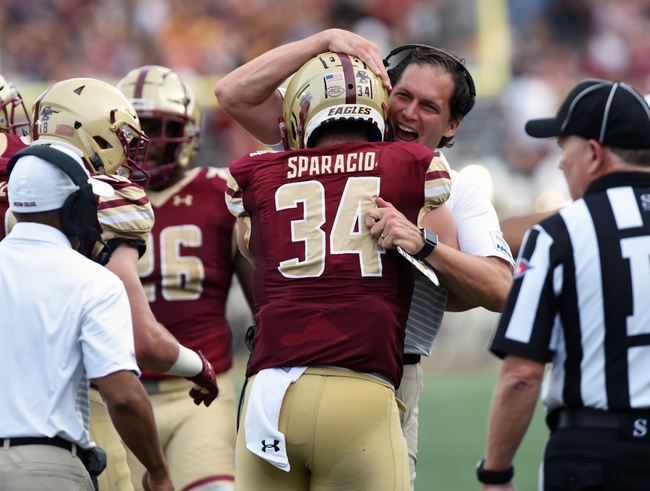 The Richmond Spiders and the Boston College Eagles will meet up on the college football circuit on Saturday.

Richmond kicked off their season with a big win over the Jacksonville Dolphins. In that one, the Spiders had a 31-6 lead at halftime and cruised to a 38-19 victory.

Joe Mancuso threw for 131 yards in the Spiders’ win Week 1, and also led the rush with 77 yards and two touchdowns. Isaac Brown was Richmond’s top receiver on 51 yards from five grabs.

Boston College put up a victory in their opener as well, though theirs was a little closer. The Eagles took out Virginia Tech in Week 1 with a 35-28 win, scoring 21 points in the second quarter alone.

Boston College’s Anthony Brown had a nice line in Week 1, bagging 275 yards with two touchdowns. AJ Dillon led the Eagles rush with 81 yards and a score, while Zay Flowers had 91 yards and a TD receiving.

Meanwhile, the Eagles are 14-3-1 ATS in their last 18 after an ATS win and the over is 5-1 in their last six non-conference games. The under is 5-0 in Boston College’s last five after a straight-up win.

There’s not much to nitpick on when it comes to Richmond’s Week 1 victory; they did a good job at spreading the ball around and maintaining their lead. Boston College will be a tougher customer however, and the Eagles will put up the points when they get rolling.