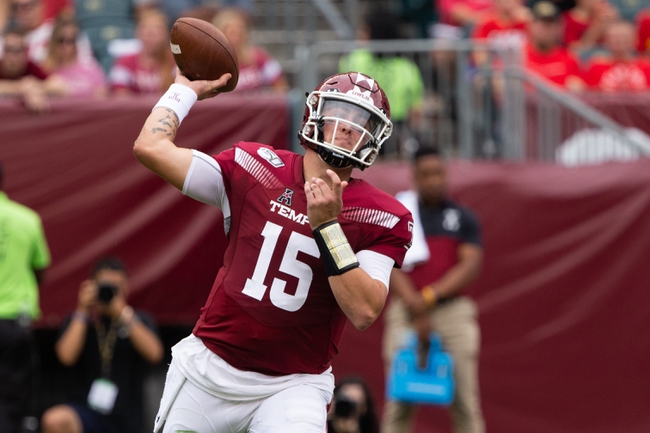 The Temple Owls and the Buffalo Bulls meet in a week 4 college football matchup from UB Stadium on Saturday afternoon.

The Temple Owls will look to build on their current 2-0 record after a solid win over Maryland in their last outing by a final score of 20-17. Anthony Russo has thrown for 686 yards, 7 touchdowns and 2 interceptions on 66.7% passing while Re’Mahn Davis has 152 rushing yards and Jager Gardner has 136 rushing yards and 2 touchdowns. Jadan Blue leads Temple’s receiving group with 15 catches for 249 yards and 2 touchdowns while Branden Mack, Isaiah Wright and Travon Williams each are in the 100-yard receiving club for the Owls through the first two games of the season. Defensively, Harrison Hand leads the Owls with 12 total tackles while Ifeanyi has 11 solo tackles and a team-high 3 sacks. As a team, Temple is averaging 561 yards of total offense and 38 points per game this season.

The Buffalo Bulls will look for a bounce back performance after losing to Liberty by a final score of 35-17 last time out. Matt Myers has thrown for 481 yards, 5 touchdowns and an interception on 48.6% passing while Kevin Marks leads Buffalo in rushing with 247 yards and Jaret Patterson has 230 rushing yards this season. Antonio Nunn leads the Bulls’ receiving group with 9 catches for 162 yards and Zac Lefebvre has a pair of receiving TDs for Buffalo this season. Defensively, Joey Banks leads Buffalo with 18 tackles split between 9 solo and 9 assisted tackles while Tyrone Hill has 17 tackles including a team-high 12 solo tackles this season. As a team, Buffalo is averaging 385.3 yards of total offense and 22.7 points per game this season.

Temple put together a strong performance against a Maryland team that had just hung up 63 points on Maryland the week before, so the Owls being favored over Buffalo kind of makes sense given how poor the Bulls looked against Liberty. However, both of Temple’s games this season have been at home, and even with a solid win over Maryland, I’m not ready to just two touchdowns on a whim. Both of Buffalo’s losses came on the road, and I think that Buffalo will be keen to make amends for their terrible showing against the Flames while Temple could be in for a letdown after such a hard-fought and emotional win over Maryland. I want the two free touchdowns in my pocket here.