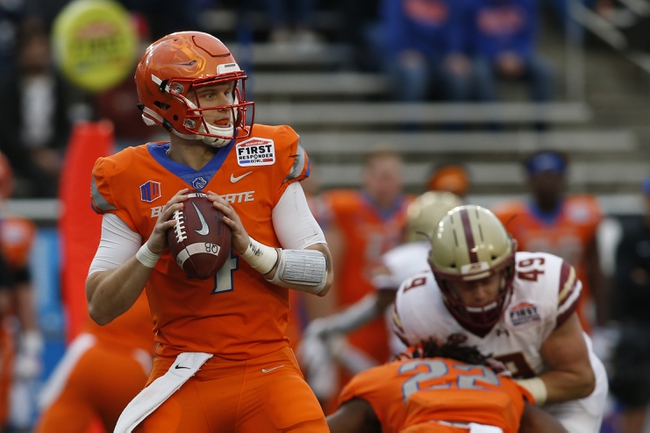 On Saturday, the No. 14 ranked Boise State Broncos visit LaVell Edwards Stadium in Provo, Utah to play the BYU Cougars. The Broncos remained unbeaten following a 59-37 victory over Hawaii on Saturday. Chase Cord passed for 175 yards with three touchdowns after Hank Bachmeier went down injured to lead the Broncos to the 22-point victory. Bachmeier is expected to play versus BYU.

BYU fell to 2-4 on the season following its 27-23 loss to South Florida on Saturday. Jaren Hall led the Cougars on the ground and through the air as the dual-threat quarterback threw for 148 yards and rushed for another 83 in the loss, including a touchdown run of 29 yards that put BYU in front 23-14. However, the BYU defense could not hold off the Bulls who scored 13 unanswered points in the fourth quarter.

The UNDER has cashed in 8 of the Broncos last 11

Boise State is having a far better season at 6-0 vs BYU at 2-4, but quarterback Hank Bachmeier will not be 100% and could sit out with an injury. BYU has not fared well straight up this season, but has covered the number in 6 of its last 7 in Mountain West Conference play. The Cougars have a dual threat at quarterback in Jaren Hall which adds another dimension the Broncos defense will have to deal with. Final Score Prediction, Boise State Broncos win but fall short ATS 30-27