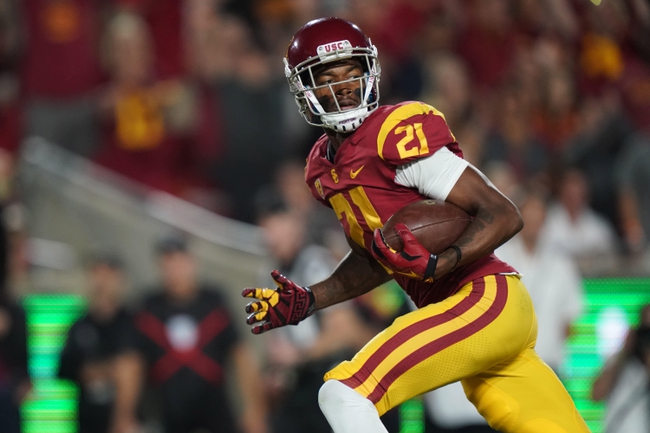 The USC Trojans and the BYU Cougars meet in a week 3 college football matchup from LaVell Edwards Stadium on Saturday afternoon.

The USC Trojans will look to build on their 2-0 start to the year after a 45-20 beatdown of Stanford in their last outing. Kedon Slovis has thrown for 434 yards, 3 touchdowns and an interception on 34 of 41 passing for an 82.9% completion percentage while Vavae Malepeai has 176 rushing yards and 3 touchdowns and Stephen Carr has 89 rushing yards and a pair of TDs. Tyler Vaughns has 16 catches for 256 yards to lead USC’s receiving group while Amon-Ra St. Brown has 13 grabs for 135 yards and a pair of scores. Defensively, Talanoa Hufanga and John Houston Jr. are tied for the team-high with 18 tackles this season. As a team, USC is averaging 469.5 yards of total offense and 38 points per game this season.

The BYU Cougars will also be looking to pick up some steam after picking up their first win of the season in a 29-26 double overtime win over Tennessee last time out. Zach Wilson has thrown for 440 yards, a touchdown and 2 interceptions on 40 of 62 passing for a 64.5% completion percentage while Ty’Son Williams has rushed for 137 yards and 3 touchdowns this season. Micah Simon has a team-high 10 receptions for 162 receiving yards while Matt Bushman has 8 grabs for 102 yards. Defensivelt, Kavika Fonua has a team-high 17 tackles and an interception while Isaiah Kaufusi has 14 tackles this season. As a team, BYU is averaging 319.5 yards of total offense and 21.5 points per game this season.

BYU did a solid job rebounding from their loss to Utah to rally and beat Tennessee in OT. However, while USC has had their issues on the road, the Trojans just beat the heck out of a solid Stanford team with their backup in charge, who didn’t look like a backup at all in that victory. Granted, this will be Slovis’ first true road test, but I think it speaks volumes that the Trojans are favored here. I’ll lay the points with USC in a game I see the Trojans winning by a touchdown.