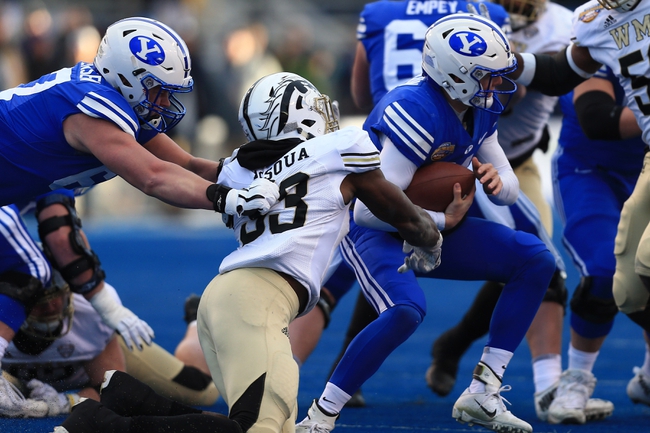 The Utah Utes come into the 2019 season as a legitimate threat in the Pac-12 South after finishing the 2018 campaign with a 9-5 overall record, including 6-3 in Pac-12 conference play, good enough for the Pac-12 South regular season title and a spot in the Pac-12 title game that the Utes lost to the Washington Huskies by a final score of 10-3. The Utes then went on to play in the Holiday Bowl, a game that saw Utah fall to Northwestern by a final score of 31-20. Tyler Huntley is back under center after missing the last five games of 2018 with a broken collarbone. The Utes will also hope to use Huntley’s scrambling ability in combination with running back Zack Moss who racked up 1,096 yards and 11 touchdowns in nine games before injuring his knee, ending his season early. Britain Covey remains to lead Utah’s receiving corps after catching 60 balls for 637 yards to lead the team in both departments last season. Defensively, Leki Fotu and Bradlee Anae return to bolster a defense that looks to build on a 2018 season that saw Utah finish tops in the Pac-12 and 4th in the country in defending the rush and #2 overall last season. As a team, Utah averaged 397 yards of total offense and 28.1 points per game last season.

The BYU Cougars come into the 2019 campaign looking to build on a decent 2018 season that saw the Cougars finish with a 7-6 overall record including a 49-18 beatdown victory over Western Michigan in the Famous Idaho Potato Bowl. Zach Wilson comes in as the incumbent starter under center for BYU, after throwing for 1,578 yards, 12 touchdowns and 3 interceptions on 65.9% passing last season. The Cougars will look to South Carolina transfer Ty’Son Williams to lead the ground attack, with returner Lopini Katoa having a history of injury problems and last year’s leading rusher Squally Canada graduating from the program. Gunner Romney will hope to have moved past his hamstring issues that shortened his freshman season while Matt Bushman is expected to see a lot of action at the tight end position. Khyiris Tonga will anchor the defensive line while Dayan Ghanwoloku will lead the secondary for a BYU defense that was top-20 last season in terms of total defense. As a team, BYU averaged 365.3 yards of total offense and 27.2 points per game last season.

The points with BYU is tempting considering that the Cougars are at home and that the last six meetings have been decided by eight points or less so the Cougars know how to play the Utes tough. However, Utah looks as tough as any team in the Pac-12 this season and while Wilson has a lot of potential at QB for BYU, there’s still a lot that’s been unproven for BYU and there are a lot of question marks coming into the season. BYU needs this game with a tough schedule with the likes of Tennessee, USC, Washington, Toledo and Boise State all coming up before the end of October, but I just think that Utah can flex some muscle here and win by at least a touchdown so I’ll lay the points with Utah in this one.