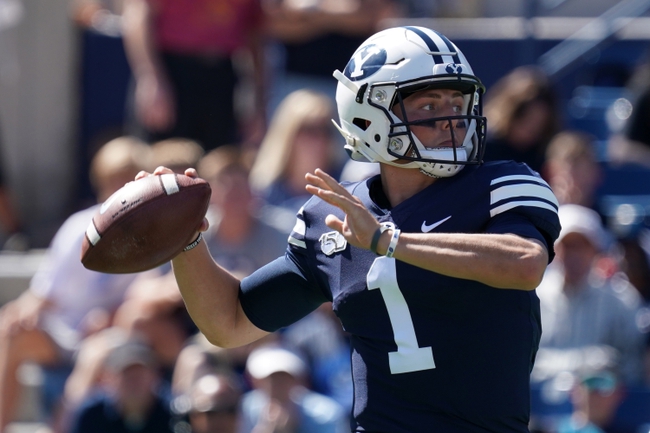 The Washington Huskies and the BYU Cougars meet in a week 4 non-conference college football matchup from LaVell Edwards Stadium on Saturday afternoon.

The Washington Huskies will look to build on a 52-21 beatdown of Hawaii to improve to 2-1 on the year in their last outing. Jacob Eason has thrown for 773 yards, 7 touchdowns and an interception while Salvon Ahmed has a team-high 246 rushing yards and 2 touchdowns and Richard Newton has 162 rushing yards and 4 rushing TDs for the Huskies this season. Hunter Bryant leads Washington with 15 receptions for 236 yards while Aaron Fuller has 13 grabs for 168 yards and 3 touchdowns and Andre Baccellia has 150 receiving yards as well for Washington this year. Defensively, Kyler Gordon and Kyler Manu share the team-high with 17 tackles while Benning Potoa’e has a pair of sacks this season. As a team, Washington is averaging 456.7 yards of total offense and 39.3 points per game this season.

The BYU Cougars will also look to build on a 30-27 win over USC to improve to 2-1 on the year following back-to-back victories. Zach Wilson has thrown for 720 yards, 2 touchdowns and 2 interceptions on 63.2% passing while Ty’Son Williams leads the Cougars in rushing with 236 rushing yards and 3 rushing TDs this season. Micah Simon leads BYU in receiving with 13 receptions for 210 yards while Matt Bushman and Gunner Romney each have 100+ receiving yards for the Cougars this season. Defensively, Kavika Fonua leads BYU with 30 tackles while Dayan Ghanwoloku has 19 tackles and Austin Lee has 17 tackles this season. As a team, BYU is averaging 356.3 yards of total offense and 23.7 points per game this season.

I can kind of understand Washington being favored here as they’re the much better offensive team statistically, but their lone road game this year saw the Huskies drop a surprising game against now-ranked Cal as almost tow touchdown favorites. BYU has thrived in the underdog role in the last couple of game, and while they needed overtime in both, the Cougars picked up a pair of solid wins over Tennessee and a pretty good USC team. This line is showing the Cougars no respect for what they’ve accomplished in the last couple of weeks, and I think BYU will be up to the task again, so I’ll take the Cougars and the points in a game BYU could very well win outright for the third week in a row.