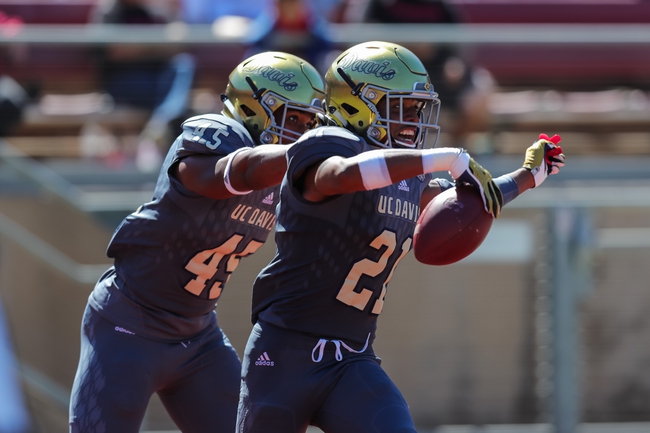 The UC Davis Aggies and the California Golden Bears will meet up on the college football field Saturday.

In 2018, the Aggies pulled off a successful regular season, going 7-1, finishing in a three-way tie for the Big Sky championship with Weber State and Eastern Washington. UC Davis earned an at-large bid to the FCS Playoffs, taking out Northern Iowa then falling to Eastern Washington in the quarterfinal round.

The Aggies will once again be helmed by head coach Dan Hawkins. He’ll have OC Tim Plough and DC Robert Tucker alongside him at UC Davis this year.

Over on the California side, they’re coming out of a 2018 season where they went 7-6 overall and 4-5 in the Pac-12. Cal had some signature wins on their resume last year, taking out #15 Washington and breaking a 14-year losing streak to USC.

The Golden Bears earned a trip to the Cheez-It Bowl against TCU, where they lost an overtime heartbreaker 10-7.

Meanwhile, the under is 8-1 in the Bears’ last nine overall and 5-1 in their last six games on turf. The under is also 5-1 in California’s last six non-conference games.

UC Davis has another mapped path to the Big Sky championship this season, and again they’ll have to contend with Eastern Washington to get there. Weber State, Montana State and Montana could potentially cause some troubles for them as well.

As for Cal, the good news is that they’re going back into a familiar system, but they’ve got their work cut out against the likes of Oregon, Washington, Stanford and Washington State.

This will probably be a fun game to watch. All in all, I think UC Davis has enough talent and flash to bang out a cover.