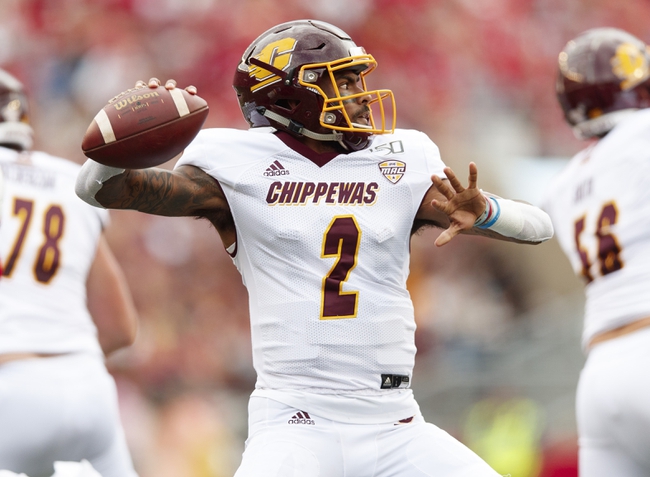 The Akron Zips and the Central Michigan Chippewas meet in week 3 college football MAC-tion from Kelly/Shorts Stadium on Saturday afternoon.

The Akron Zips will look to bounce back from an 0-2 start after a 31-20 loss to UAB in their last outing. Kato Nelson leads the Zips in passing with 481 passing yards, 2 touchdowns and an interception on 35 of 68 passing for a 51.5% completion percentage. Deltron Sands leads the Zips in rushing with 56 rushing yards and a touchdown while Dustin Burkhart has a team-high 217 receiving yards and Nate Stewart has a team-high 9 receptions for 107 yards and a touchdown. Defensively, Bubba Arslanian leads Akron with 11 tackles and a sack while John Lako is 2nd with 8 tackles. As a team, Akron is averaging 292.5 yards of total offense and 11.5 points per game while allowing 401.5 yards and 36.5 points per game this season.

The Central Michigan Chippewas will look to rebound from their first loss of the season, falling to 1-1 on the year with a 61-0 loss to Wisconsin in their last outing. Quinten Dormady has thrown for 321 yards, 3 touchdowns and an interception on 32 of 49 passing for a 65.3% completion percentage. Jonathan Ward leads the Chips in rushing with 161 yards and a pair of touchdowns while Tyrone Scott had a team-high 93 receiving yards and a pair of touchdowns and Kalil Pimpleton has a team-high 11 receptions for 58 yards and a touchdown. Defensively, Devonni Reed leads the Chippewas with 5 tackles. As a team, Central Michigan is averaging 302 yards of total offense and 19 points per game while allowing 421.5 yards and 41 points per game this season.

The points with Akron are worth a look given that the Zips won the meeting last season and a lot of the head-to-head matchups in the 2000s have been close with six of 11 meetings being decided by 8 points or less. However, the Chippewas have pretty much owned Akron over the years and while the Chippewas got whooped by Wisconsin, I think it was a good learning experience and Central Michigan will come out firing here so I’ll lay the points with Central Michigan in this one.