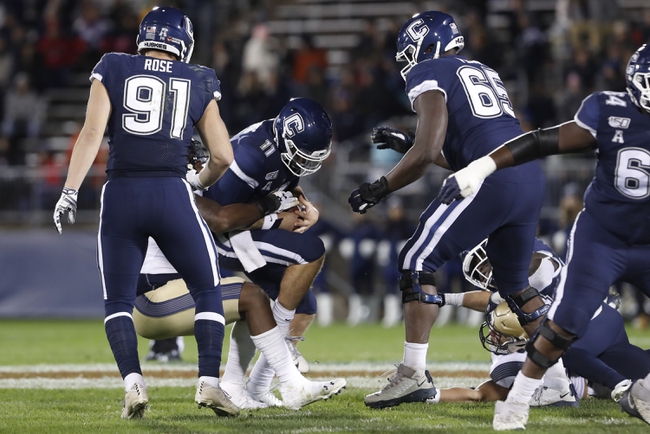 No. 17 Cincinnati (7-1; 4-0 AAC) will look to avoid disaster on Saturday as the Bearcats host the UConn Huskies (2-7, 0-5 AAC) at Nippert Stadium in Cincinnati. The Bearcats sit atop the American Athletic Conference East Division and are in a prime position to reach the AAC title game with a one-game lead and a tiebreaker over second-place Central Florida. With a road game at Memphis still remaining and a much easier schedule left for Central Florida, the Bearcats have no room for error moving forward.

That shouldn’t be a problem against UConn, who has statistically developed into one of the worst teams in FBS. The Huskies have just two wins this season and just one against FBS competition -- a 56-35 drubbing of rival “U” school UMass two weeks ago. But a return to AAC competition was a return to reality for UConn with a 56-10 loss to Navy. In AAC play this year, the Huskies are being outscored by an average of 46.6-15.4, but incredibly, UConn is just 4-5 against the spread this year, no doubt due to inflated spreads like the one for this game.

UConn hasn’t done much on either side of the ball, ranking 115th out of 130 FBS schools on offense scoring 20.3 points per game, and it is worse on defense ranking 128th allowing 39.8 points per game. But it was just three weeks ago that Houston was a 22-point favorite and UConn was able to keep the game to a 24-17 decision. So no matter how much better Cincinnati is on paper, and Cincinnati is a much better team on paper, a 34.5 point spread is certainly within reach.

Betting UConn on the money line might not be within reach, however. Other than a 42-0 crushing at the hands of Ohio State, Cincinnati has been in control of its season. Aside from a 27-24 win over Central Florida, the Bearcats had won every game by double figures until last week when East Carolina surprised them and nearly pulled off a major upset despite being 24-point underdogs in a 46-43 final. Cincinnati trailed by double digits with less than nine minutes left in the game but sophomore quarterback Desmond Ridder led his team on two scoring drives to lead his team to the win.

Cincinnati is as balanced a team as many can find averaging 205.3 yards passing and 189.4 yards rushing per game. Michael Warren II is the leading rusher with 639 yards and seven touchdowns on 132 attempts, but Ridder has added 323 yards and Gerrid Doaks 253 yards on 50 carries this season.

These games with such massive lines are nearly impossible to pick. Few would argue that Cincinnati will win, but how long will starters play? How motivated is UConn at this point in the season? Is Bearcat head coach Luke Fickell looking to run it up to get the ball rolling heading into the final three games of the season, or is he simply looking to get out of the game unscathed? A look at the last two weeks might be the hint to look for.

Cincinnati played Tulsa and East Carolina -- the other two worst teams in the AAC -- in the last two weeks. Against Tulsa, the Bearcats were 16 point favorites and won 24-13. Against East Carolina, they were 24 point favorites and won 46-43. Cincinnati is not getting up to play these lower-level opponents. The offense stumbled against Tulsa, along with a leg injury to Warren II, and the defense was unable to stop East Carolina the next. Why think that will change this week? Take the points and the Huskies.