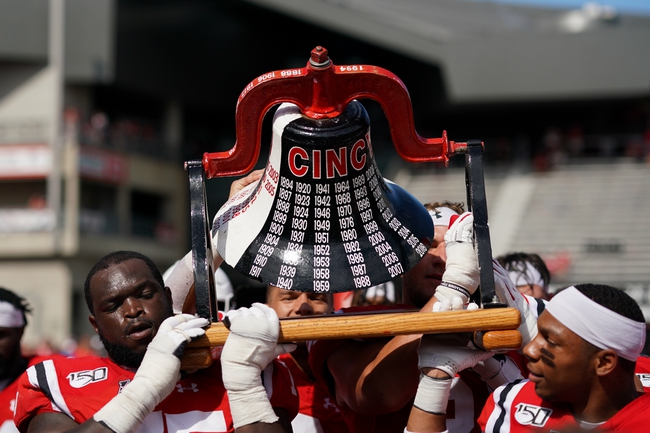 In Friday night college football action, the UCF Golden Knights will invade Nippert Stadium to tackle the Cincinnati Bearcats. The 17th ranked Bearcats bounced back from their only loss on the season to score an easy 56-21 home victory versus Connecticut on Saturday. UCF QB Dillon Gabriel threw for 281 yards and three touchdowns and Gabriel Davis was on the receiving end of two of those scores.

UCF need just less than 22 minutes of possession to rack up 607 yards of total offense. The defense forced four turnovers and did not allow a point in the first half.

The Cincinnati Bearcats are a program on the rise and suffered their only loss at fifth ranked Ohio State. On Saturday, Cincinnati served notice with a 52-14 road triumph against highly regarded Marshall. Desmond Ridder had as many touchdown passes (four) as incompletions in the rout. Tavion Thomas added 70 yards and a score on the ground for the Bearcats.

Cincinnati outgained Marshall by an impressive 525-256 margin and controlled the ball for 37 minutes. The defense limited the Thundering Herd to 4-for-15 on third down conversions.

UCF has won three straight matchups in this series by an average of 25 points. Cincinnati has what it takes to be a contender in the American Conference and knock off the champs. Take the Bearcats to pull off the upset. Final Score Prediction, Cincinnati Bearcats 30-27.