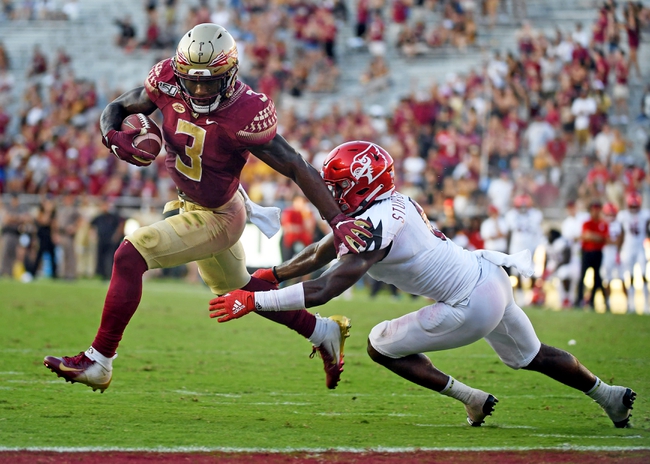 The Florida State Seminoles are set to visit Memorial Stadium in Clemson, South Carolina for an ACC clash against the Clemson Tigers. The Florida State Seminoles come into this matchup with a 3-2 record, and they will be looking to continue their success after winning their recent home game against the NC State Wolfpack, 31-13. QB Alex Hornibrook had a big game for the Seminoles as he connected on 29 of his 40 pass attempts for 316 yards and 3 TDs. WR Tamorrion Terry was the top target for Hornibrook and the Seminoles as he hauled in 5 catches for 77 yards and 2 TDs.

The Florida State Seminoles were solid on the defensive side of the ball against the NC State Wolfpack as they held them to 13 points while forcing them into 2 turnovers. Junior DB Cyrus Fagan led the way for the Florida State defense with 10 tackles and a pass deflection. Freshman LB Amari Gainer was able to get into the NC State backfield a handful of times as he contributed 9 tackles, 2.5 TFL, 2 sacks, and a forced fumble.

The Clemson Tigers come into this matchup with a 5-0 record, and they will be looking to continue their success after winning their recent road game against the North Carolina Tar Heels, 21-20. QB Trevor Lawrence had a solid game for the Tigers as he connected on 18 of his 30 pass attempts for 206 yards and a TD. WR Tee Higgins was the top target for Lawrence and Clemson as he hauled in 6 catches for 129 yards and a TD.

The Clemson Tigers were solid on the defensive side of the ball against the North Carolina Tar Heels as they held them to 20 points and a total of 290 yards of offense. Junior LB Isaiah Simmons led the way for the Clemson defense with 10 tackles, 2.5 TFL a pass deflection, and a sack. Junior safety Nolan Turner was able to have a solid game from the secondary for the Tigers as he contributed 6 tackles and a TFL.

The Clemson Tigers are once again a big favorite to win the ACC and return back to the playoffs, but they showed some deficiencies in their recent game against UNC. The Florida State Seminoles have looked much better the last 2 games with Wisconsin transfer Alex Hornibrook under center, and I expect him to keep the Seminoles in this game due to his veteran leadership and poise. The Seminoles offense has been on fire all season, but their defense has been questionable which will allow Lawrence and the Tigers to expose it. The Seminoles will try to deploy a heavy dosage of Cam Akers to control possession, and I think they stick with the Tigers coming off the bye week.