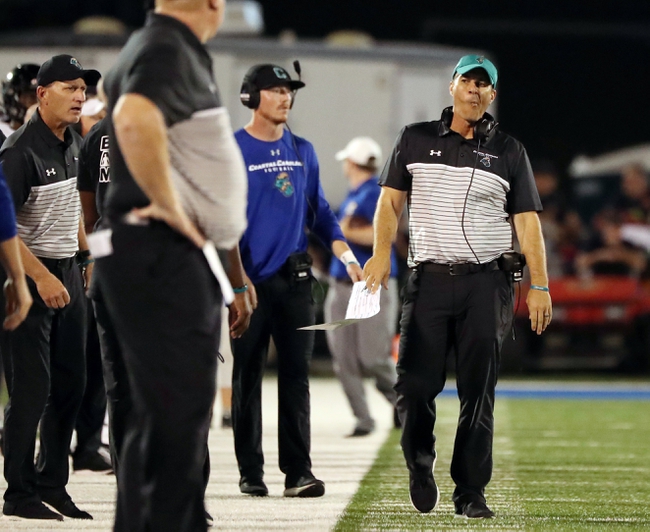 The Texas State Bobcats have an almost non-existent running game, averaging 80 yards per outing. Their passing game is good, averaging 238 yards. Coastal Carolina is much more balanced, averaging 193 rushing, and 202 passing. Texas State is giving up an average of 50 more yards per game than the Chanticleers.

Coastal started the year at 3-1, beating Kansas on the way. Since then they are 1-6 and have lost the last three.

The Chanticleers utilize two quarterbacks. Fred Payton has 1378 yards, 11 touchdowns, and seven interceptions. Bryce Carpenter has passed for 813 yards seven touchdowns and two interceptions. Carpenter ha also run for 380 yards and one touchdown. CJ Marable has run for 984 yards and 10 touchdowns. Three receivers have about 350 yards each.

Both teams have had two three-game losing streaks this year, and Texas State has lost its last two.

Texas State won the only previous game between these teams in 2017.

The Bobcats have dropped 2 of their last games and that can weigh heavily on the minds of the Bobcats players, but the difference is this game will see the Bobcats offense coming in and having the dual threat of quarterbacks be able to control the game rather easily here as the Bobcats do better offensively to hand the Chanticleers and upset loss. Final Score Prediction, Texas State Bobcats win, but grab the points 31-28.