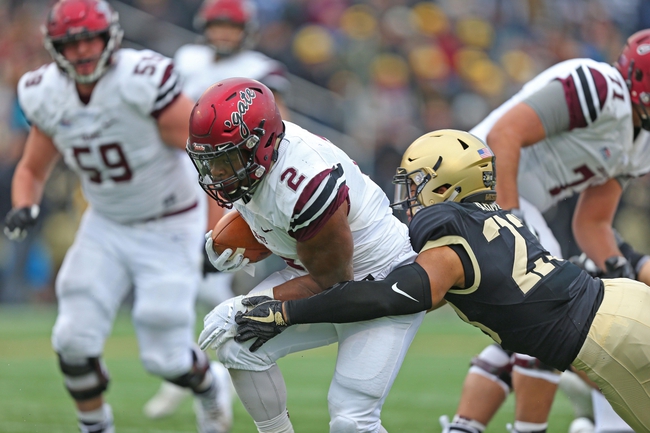 The Villanova Wildcats have won five games each of the last two years and enter the third season under coach Mark Ferrante. The Villanova Wildcats have won four of their last six road games. Villanova has an experienced quarterback in Jack Schetelich, who threw 49 passes last year, but this offense is likely going to be a work in progress with so many producers leaving, including starting QB Zach Bednarczyk. The good news is running back Justin Covington returns after a productive season in the backup role and wide receiver Changa Hodge averaged 15.6 yards per reception on 16 catches. Defensively, four of the top-five tacklers from last year return for Villanova, including defensive back Jaquan Amos who led the charge with 57 tackles and two interceptions. Malik Fisher is back on the defensive line after a five sack season and 9.5 tackles for loss, while Christian Benford had six pass deflections and five picks. This Villanova defense has the potential to be very good and will likely carry the team until the offense figures things out.

The Colgate Raiders are coming off a 10-win season that ended in the FCS Playoffs Quarterfinals, and they enter this season as a top-15 team in the country. The Colgate Raiders have won seven of their last 10 home games. Grant Breneman returns at QB, and he’s coming off a season where he threw for 1,600 yards and six touchdowns while also rushing for seven scores. Colgate lost a lot on the outside at wide receiver and will have to replace 1,000-yard rusher in James Holland, but having an experienced and dual-threat quarterback in Breneman keeps this Raiders offense ahead of the curve. Defensively, Colgate also has to replace its top-three tacklers from a year ago, but Nick Wheeler and Nick Ioanilli is a duo that combined for 23 tackles for loss and 11.5 sacks. Abu Daramy should be able to hold down the secondary as well after coming away with three interceptions and two pass deflections last season. The Colgate Raiders should have another playoff berth on their mind this season.

The Villanova Wildcats were better on the road than they were at home last season, and that includes a win over the Temple Owls opening week. Villanova has the potential to be very good defensively, but I worry about the offense due to a lack of answers at QB and the playmakers no longer on the roster. The Colgate Raiders have some holes to fill as well, but they're still the class of the Patriot League with an experienced quarterback and a quality defense that makes plays. At home, Colgate should be able to win this game by a touchdown.

The pick in this article is the opinion of the writer, not a Sports Chat Place site consensus.
Previous Pick
Edmonton Eskimos vs. Winnipeg Blue Bombers CFL Pick, Odds, Prediction - 8/23/19
Next Pick
Samford vs. Youngstown State - 8/24/19 College Football Pick, Odds, and Prediction