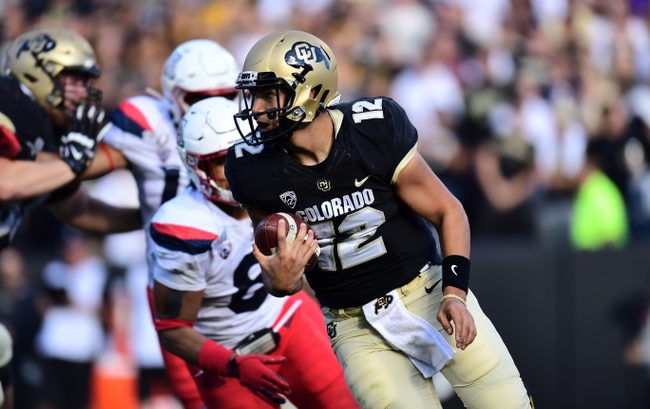 The Colorado Buffaloes will head to Autzen Stadium for a Friday night Pac-12 matchup against the Oregon Ducks in Eugene, Ore.

It’s a strange look happening with the green and yellow up in the Pacific Northwest. Oregon, the perennial offensive juggernaut, is off to an impressive 4-1 start to the season with its only loss coming at the hands of Auburn in a close 27-21 decision. Since that loss, the Ducks have been able to get it done in a way that few might have expected -- with their defense. Sure, Oregon Is still a top 20 team in the FBS offensively at 38.5 points per game, but take out the outrageous 77-6 win over Nevada in week 2 and the Ducks are averaging just 23.5 points per game.

But it is that defense that just keeps quacking along, shutting opponents down week after week. After the loss to Auburn, Oregon has allowed 6, 3, 6, and 7 points to its opposition. In fact, the 10.5 points per game allowed is seventh in the FBS, ahead of defensive standouts such as Michigan State and Clemson.

So Oregon is -- and should be -- the overwhelming favorite to win on Friday night. But can Colorado keep it close, or at least within three touchdowns? The answer is … maybe? If nothing else this season, the Buffaloes have been able to do one thing really well, and that is keep games close. After a blowout 52-31 win over in-state rival Colorado State, Colorado defeated then-No. 25 Nebraska 34-31 in overtime, then lost to Air Force also in overtime. The Buffs then knocked off another nationally-ranked foe in then-No. 24 Arizona State 34-31 before falling to Arizona, 35-30.

The common theme? Close games every week, even against the better teams on the schedule. So is it realistic to think that the Buffaloes can score against Oregon’s elite defense? The answer is yet. Colorado scored 34 against Arizona State, which is ranked 10th in FBS in scoring defense, as well as scoring 23 against the Air Force’s 38th-ranked scoring defense in a game that Air Force controlled the time of possession battle.

Colorado gives up about 30 points per game no matter the opponent, and Oregon hasn’t shown itself to be elite at all on the offensive side of the field, except against Nevada. Even if Oregon were to score 35, is it realistic to think that Colorado can score 15? That is the question that must be answered. If Colorado can score 15, take the Buffs and the 20.5 points. If not, take the under. The total of 57 is a big number is Colorado can’t score 15 points.

Colorado has shown a penchant to score on anyone and there is no reason to believe that won’t continue. A 38-20 game seems about right here. Take the Buffs and the points.