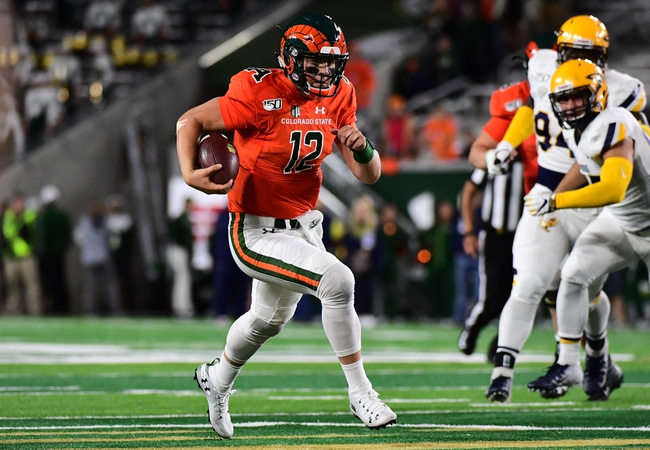 Colorado State has had a difficult road to start its 2019 campaign, but what a strength of schedule it has put together. While the Rams haven’t opened up with Alabama, Clemson, and Ohio State, they did open with in-state rival Colorado of the Pac-12, and following a win over Western Illinois, the Rams have faced the SEC’s Arkansas, 4-1 Toledo, and MWC powers Utah State and San Diego State. The 1-5 overall record isn’t pretty, but Colorado State has been somewhat competitive in the last three weeks, falling by less than two touchdowns in each game.

New Mexico’s strength of schedule hasn’t been as strong -- save for a game against Notre Dame in which the Lobos lost 66-14. And even though New Mexico has split its other two games this season, it has also lost its last two against decent, but far from powerhouse, teams in San Jose State and Liberty. The Lobos’ two victories were one-possessions wins over Sam Houston State and in-state rival New Mexico State.

A key matchup on Friday night will be New Mexico and its desire to run the ball. The Lobos have bucked the Air Raid trend in college football and have used running plays 62 percent of the time this season. Senior Ahmari Davis has been impressive carrying the ball 93 times for 457 yards (4.9 yards per carry) and four touchdowns and will be looked upon to impose his will on the Colorado State defense that is ranked just 123rd out of 130 FBS football teams in rushing defense allowing nearly 240 yards per game on the ground. How much of that is the Rams facing run-happy teams like San Diego State and Toledo and how much is simply a weakness? It’s tough to tell, but it’s definitely worth watching.

There are two ways to play this game. One would be to take the over. Even though 68 is an outrageous number, the over has been reached in each of New Mexico’s last three games and in three of Colorado State’s last four. The concern, however, is that the Lobo offensive line really gets rolling and New Mexico controls the ball on the ground to a still high-scoring, but below-the-over total of something like a 35-24 game. It isn’t worth taking that risk.