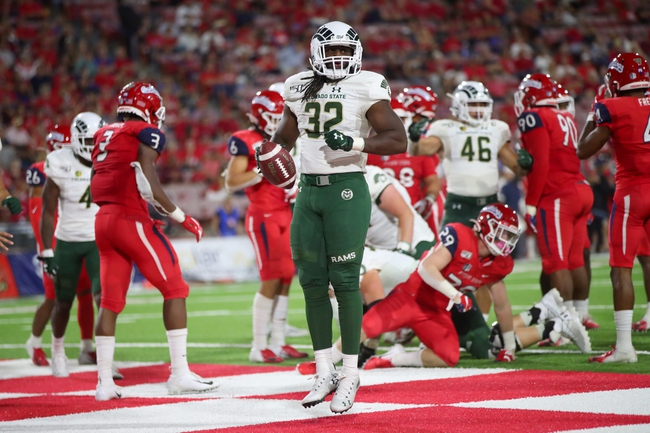 The UNLV Rebels visit the Colorado State Rams this week in a battle in the Mountain West conference.  In the Rebels last game, they were defeated at home by San Diego State by the score of 20-17.  Rebels quarterback Keyon Oblad threw 39 passes on the day, completing 21 of them for 2 touchdowns and didn’t throw an interception.  Wide receiver Randal Grimes was the Rebels top receiver as he caught 5 passes for 121 yards and a touchdown.  UNLV also had a good day on the ground as running back Charles Williams carried the ball 19 times for 113 yards, including a long rush of 42 yards.  The UNLV defense allowed 335 total yards in the loss including 185 through the air.

The Rebels come into this week’s game with a record of 2-6 but are currently winless in conference play with a record of 0-4.  On the year, Oblad has thrown for 1,251 yards and 10 touchdowns, but has also thrown 6 interceptions.  On the ground, Williams in the teams leading rusher and has 134 carries for 793 yards and 7 touchdowns on the season.  Grimes has been the lead receiver on the year and has caught 31 passes for 474 yards and 5 touchdowns.  The Rebels are not exactly great on either side of the football.  On the year, UNLV is giving up 34.1 points per game, against scoring just 24.4 points per game.

The Colorado State Rams come into Saturday’s game after a 41-31 win at Fresno State which included a big 17 point 4th quarter that helped CSU pull out the win.  Quarterback Patrick O’Brien completed 23 passes on 42 attempts for 322 yards and 2 touchdowns while throwing 1 interception.  Wide receiver Warren Jackson had a monster game, catching 9 passes for 178 yards and a touchdown.  The other touchdown pass was caught by Trey McBride who caught just 2 passes but totaled 79 yards and a touchdown of his own.  Not to be outdone by the throwing game, running back Marcus McElroy carried the ball 18 times for 117 yards and 2 touchdowns.  The Colorado State offense totaled 500 yards offensively in a great showing for the Rams, while the defense gave up 388 yards.

On the year, Colorado State is 3-5 with a conference record of 2-2 and will be looking to go above .500 on conference play on Saturday.  On the year, O’Brien has thrown for 1,716 yards, 8 touchdowns and 3 interceptions.  Marvin Kinsey Jr has been the Rams leading rusher on the season, rushing 121 times for 703 yards and 6 touchdowns.  Jackson has been the Rams leading receiver with 49 receptions for 719 yards and 6 touchdowns.  The Rams have scored 31 points per game this season while giving up 33.9 points per game but will be looking to improve those numbers against a UNLV team that doesn’t put up many points.

While this could be a decent game, I don’t see it being too close.  Colorado State is averaging gaining 473.5 yards per game while the UNLV defense is giving up 426.9 per game.  Look for Colorado State to put up a lot of points in this one, possibly even hitting the 50 point mark if they get the ball enough times.  But for my pick, Colorado State wins 45-31 and covers the spread.