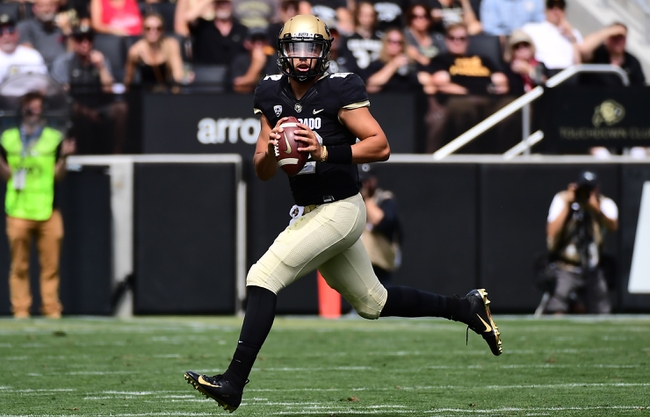 The Air Force Falcons and the Colorado Buffaloes meet in a week 3 college football matchup from Folsom Field on Saturday afternoon.

The Air Force Falcons will look to build on their season-opening 48-7 win over Colgate in their last outing. Isaiah Sanders completed Air Force’s lone pass for 41 yards while Taven Birdow had 9 carries for a team-high 80 rushing yards. Kadin Remsberg had 62 rushing yards and a pair of touchdowns while Joshua Stoner and Christian Mallard had 56 and 53 rushing yards respectively. Donald Hammond III had 3 rushing touchdowns while Timothy Jackson and Nolan Eriksen had a rushing touchdown each in the victory. Defensively, Milton Bugg III had an interception and a team-high 3 tackles while Garrett Kauppila and Vince Sanford each had 3 tackles as well.

The Colorado Buffaloes will look to build on their 2-0 start to the season after rallying for a 34-31 overtime win over Nebraska in their last outing. Steven Montez has thrown for 607 yards, 4 touchdowns and an interception on 41 of 61 passing for a 67.2% completion percentage while Alex Fontenot leads the Buffs in rushing with 167 rushing yards and 3 touchdowns and Jaren Mangham has 3 rushing touchdowns of his own. K.D. Nixon leads the Buffs in receiving with 177 receiving yards while Tony Brown has 131 receiving yards with each logging a team-high 8 receptions. Laviska Shenault Jr. also has 8 receptions so far this season. Defensively, Nate Landman leads the Buffaloes with 11 tackles while Delrick Abrams Jr. is 2nd with 9 tackles and Mikial Onu has a pair of interceptions this season. As a team, Colorado is averaging 469.5 yards of total offense and 43 points per game while allowing 487 yards of total offense and 31 points per game this season.

Going against any team that runs the option like Air Force does is risky because it tends to chew up a lot of clock when it’s working. However, the Buffaloes have been very impressive offensively in the early going and while Air Force runs the option well, they’re not the kind of team to produce high-scoring outputs with it regularly. I just don’t see Air Force being able to keep up with Colorado, and since the line isn’t too bad, I’ll lay the points with the Buffaloes in this one.