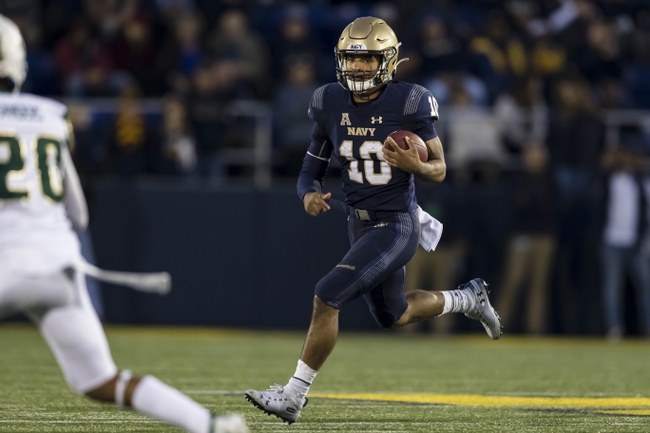 Navy (6-1, 4-1 AAC) has reached bowl eligibility for the 15th time in 17 years, but it will remain focused hoping to sneak into the American Athletic Conference title game if the Midshipmen -- or anyone else for that matter -- can sneak past AAC West Division leaders SMU. That matchup is in two weeks, but in Navy’s way this week is Connecticut (2-6, 0-4 AAC), which has been one of the worst teams in the FBS this season and is riding a 15 game losing streak in the AAC.

How bad has UConn been? Its two wins were a 24-21 victory over FCS Wagner, which is 1-7 on the season and is ranked 109th out of 124 FCS in the FCS Simple Rankings System, and a 56-35 trouncing of UMass, which has only held lowly Akron under 44 points this season and is the worst team in FBS this season in scoring defense, allowing a whopping 50.6 points per game. But UConn hasn’t been much better. It is ranked 127th out of 130 FBS teams giving up 37.8 points per game.

The worst thing for UConn is that its offense isn’t much better, ranking 117th in FBS in scoring offense at just 21.6 points per game. But that average hasn’t come from some wildly high and low scoring numbers combining to end up at 21.6 points per game. In fact, aside from the 56 points last week, and the 3 and 7 points scored against Indiana and Tulane respectively, the Huskies have scored between 17 and 24 points in each of their other five games. Some of those totals came against some respectable schools as well, such as Illinois and Central Florida.

The key stat for UConn is whether it can run the football. The Huskies have won two games, and in both of those games, they have had more rushing yards than passing. To get the ball moving on the ground, UConn will need to see junior Kevin Mensah get rolling like he did last week in the win over UMass. Mensah rushed for 164 yards and five touchdowns on 19 carries to go along with fifth-year senior Art Thompkins’ 135 yards on 13 carries and a score. If UConn can get the ball rolling on the ground, it has a chance.

Speaking of running the football, Navy leads the nation in rushing offense at more than 350 yards on the ground per game and the Midshipmen are led by senior quarterback Malcolm Perry who runs for 133 yards per game. Perry has really started rolling in the rushing attack the last three games, though, averaging 182.3 yards per game in that stretch, including a 218-yard, three-touchdown performances against Tulsa. Bad news for UConn: It ranks 102nd in rushing defense.

Last week, Navy led Tulane 24-0 but needed a late field goal to wrap up a 41-38 win. After Tulane scored with 1:01 remaining in the game, Perry put the Midshipmen within field goal range running the ball five times for 44 yards. Bijan Nichols kicked the 48-yarder, one yard shy of a career high, and Navy pulled out the win.

This is not a game to overthink. Navy runs the ball better than anyone in FBS. UConn doesn’t stop the run. UConn has been blown out this year by the likes of Indiana, Central Florida, South Florida, and Tulane -- that’s right, the same Tulane team that Navy edged last week beat UConn 49-7 three weeks ago. Yes, UConn has been better the past three weeks losing to Houston by a touchdown and knocking off UMass, but that was Houston minus D’eriq King and UMass is UMass.

That 26.5 number is a big one, but there is only one pick here: Midshipmen minus the points. Watch that triple option get rolling and it’s unlikely that UConn will be able to stop it.