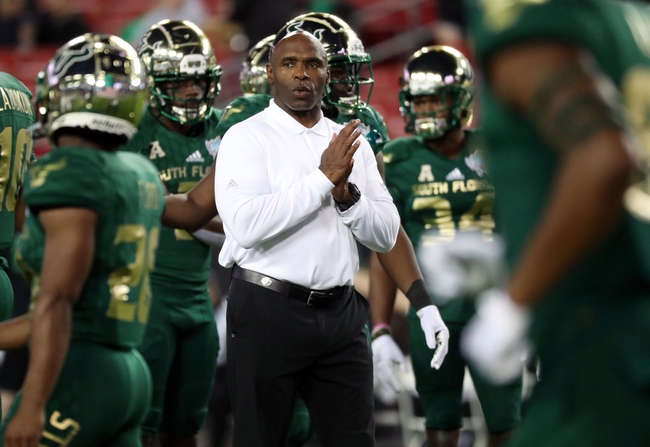 In Saturday afternoon college football action, the South Florida Bulls will go on the road to battle the UCONN Huskies. The Bulls have lost three of their first four games and are headed for another disappointing season for head coach Charlie Strong. In their AAC Conference opener, South Florida allowed the first 34 points during an embarrassing 48-21 home loss versus SMU. The Bulls gave up 497 yards of total offense and turned the ball over twice in defeat.

South Florida QB Blake Barnett completed 13-of-21 for 222 yards and three touchdowns. Mitchell Wilcox grabbed four passes for 77 yards and a touchdown for the Bulls.

The UCONN HUskies started the season off with a three-point win versus Wagner and have lost three straight games by a combined 78 points. On Saturday, UCONN allowed UCF to score the first 42 points during a 56-21 road loss. The Huskies gave up 607 yards of total offense and turned the ball over four times on the day.

UCONN QB Steven Krajewski threw for 273 yards and three touchdowns. Cameron Ross caught six passes for 91 yards and a touchdown, while Kevin Mensah added 123 yards on the ground for the Huskies.

South Florida has won seven straight matchups in this series, but Charlie Strong has done his best to move the Bulls back to the pack. Look for the Huskies to keep things close and possibly pull off the upset at home. Final Score Prediction, South Florida Bulls 27-24.