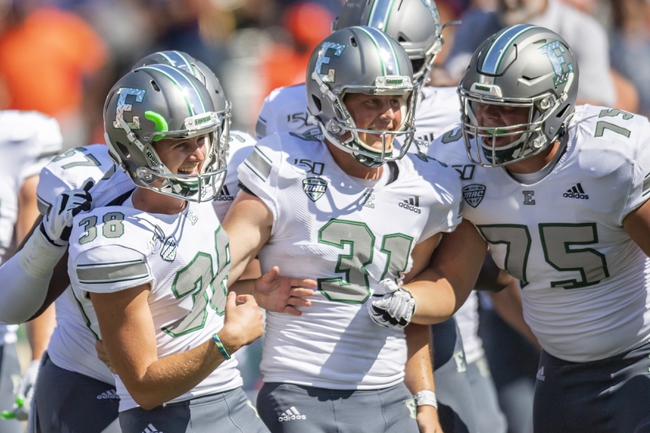 The Kent State Golden Flashes are set to visit Rynearson Stadium in Ypsilanti, Michigan for a MAC clash against the Eastern Michigan Eagles. The Kent State Golden Flashes come into this matchup with a 5-6 record, and they will be looking to continue their success after winning their recent home game against the Ball State Cardinals, 41-38. Junior QB Dustin Crum had a big game through the air as he connected on 18 of his 26 pass attempts for 369 yards and 3 TDs while also adding in 101 rushing yards and a TD. Sophomore WR Isaiah McKoy had a big game for the Golden Flashes as he hauled in 6 catches for 159 yards and 3 TDs.

The Kent State Golden Flashes struggled on the defensive side of the ball against the Ball State Cardinals as they allowed them to score 38 points and rack up a total of 538 yards of offense. Junior LB Mandela Lawrence-Burke led the way for the Kent State defense with 14 tackles, 1 TFL, 1 sack, and 1 forced fumble. The secondary had a productive game for the Golden Flashes as sophomore CB Jeremiah Salaam contributed 9 tackles and 2 pass deflections while junior safety Elvis Hines pitched in 6 tackles and 2 pass deflections.

The Eastern Michigan Eagles come into this matchup with a 6-5 record, and they will be looking to continue their success after winning their recent road game against the Northern Illinois Huskies, 45-17. Senior QB Mike Glass III had an efficient game through the air for Eastern Michigan as he connected on 20 of his 24 pass attempts for 235 yards and 3 TDs. Senior RB Shaq Vann had a productive game on the ground for the Eagles as he ran for 101 yards and a TD on 14 carries.

The Eastern Michigan Eagles were solid on the defensive side of the ball against the Northern Illinois Huskies as they held them to 17 points while forcing 4 turnovers. Senior LB Kobie Beltram led the way for the Eastern Michigan defense with 10 tackles, 2 TFL, 1 sack, and 1 forced fumble. The secondary had a productive outing for the Eagles as senior DB Brody Hoying contributed 5 tackles and 2 interceptions while senior DB Vince Calhoun pitched in 6 tackles and 1 interception.

The Kent State Golden Flashes need this game to be bowl eligible, but they will have a tough task on their hands with the explosive Eastern Michigan Eagles. The Eagles exploded for 45 points last week against the solid Northern Illinois defense, and they should be able to repeat that success against the Kent State defense as they are allowing an average of 31.5 PPG. The Eastern Michigan defense looked improved in their recent game as they recorded 3 interceptions, and they will need to force Dustin Crum into mistakes as he has only thrown 2 interceptions all season. Kent State lacks a ground game as they don’t have a RB with at least 500 yards, and that will allow Eastern Michigan to key in on the aerial attack.