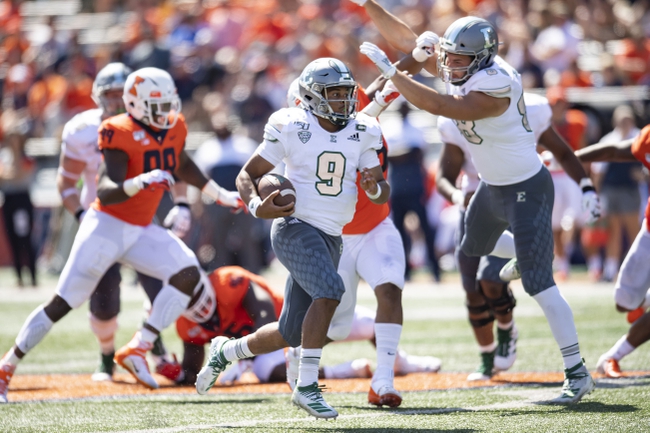 This MAC conference matchup pairs the Buffalo Bulls and the Eastern Michigan Eagles together.  The Bulls come into this road matchup with a record of (4-4).  The Bulls have won their last 2 games and most recently with a 23 point win over Central Michigan, 43-20.  The Eagles are also (4-4) on the season.  The Eagles have lost 3 of their last 4 games.  The Eagles are coming off a 37-34 road loss at Toledo.

In the win over Central Michigan, Bulls quarterback Kyle Vantrease was 13/25 for 179 yds and TD/INT ratio of 2/1.  The Bulls rushed for 197 yds in the win.  Jaret Patterson led the way with 149 yds on 28 carries and one touchdown.  Antonio Nunn had 5 receptions for 77 yds and both of the receiving touchdowns.  The Bulls were able to pull away in the game, thanks to the Bulls defense forcing 5 turnovers.

Buffalo is 1-3 ATS as the away team this season.

Buffalo is 4-4 ATS in all games this season.

Eastern Michigan is 1-2-1 ATS as the favorite this season.

Eastern Michigan is 5-3 ATS in the last 8 meeting's vs Buffalo.

The over is 4-2-2 in Eastern Michigan games this season.

Eastern Michigan has a solid win over Illinois this season, who seem to have turned the corner in the last two weeks.  However, Buffalo has had a pretty successful defense this year.  the Bulls rank 5th in both opponent yds per rush and average rushing yds allowed per game.  The Bulls are giving up an average of 2.7 per rush and 85 yds for the game.  The Eagles rank 7th in the nation in takeaways per game, averaging 2.3 a game.  The Eagles defense has had success as well, in ranking 25th in takeaways per game, averaging 2 per game.  Both teams have been solid on defense this season and look for turnovers to stall some of the drives.  Final score prediction, Buffalo wins and the total goes under 24-21.