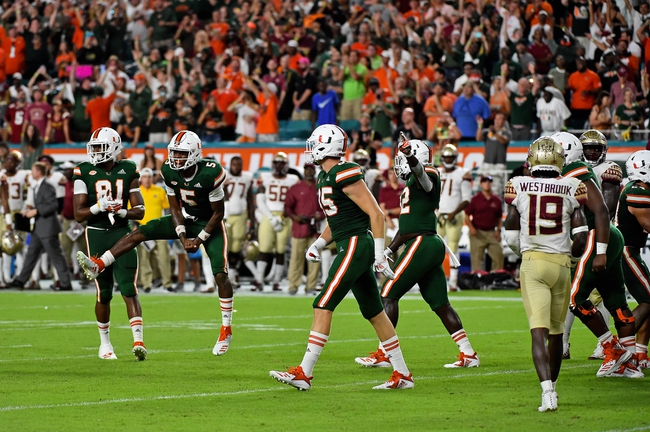 A clash between two (4-4) teams that are looking to move up the ACC standings meet in Tallahassee, FL. This matchup features the Miami Hurricanes and the Florida State Seminoles. The Hurricanes enter this game after winning a road game at Pittsburgh 16-12.  The Seminoles come into this contest looking to win their 2nd game in a row.  The Seminoles won this past weekend 35-17 over Syracuse.

Miami was able to escape Pittsburgh with a 4 point victory, thanks to a late touchdown in the final minute.  Jarren Williams found K.J. Osborn for a 32 yd touchdown with 58 seconds remaining. The Seminoles used two quarterbacks in the game.  N'Kosi Perry was 10/24 for 104 yds and an interception. Williams was 4/8 for 50 yds and the touchdown in the final minute. Osborn had 94 yds receiving in the game. Cam'Ron Harris added 60 yds rushing on 16 carries and a score.  Miami forced Pittsburgh to commit 3 turnovers in the game.

Florida State jumped out a 13-0 lead in the first quarter and never looked back in their win over Syracuse.  The Seminoles rushed for 241 yds on 47 carries and 5 touchdowns in the game.  Seminoles running back Cam Akers had a phenomenal outing in the win.  Akers had 144 yds rushing on 20 carries and was able to find the end zone 4 times.  Khalan Laborn contributed 68 yds rushing and also had 1 touchdown. The Seminoles out gained Syracuse 487-343 on the day.  The Seminoles were led defensively by Hamsah Nasirildeen with 17 tackles, while also adding 1 sack.

Miami is 2-0 ATS as an underdog this season.

Miami is 2-4 ATS in the last 6 games against FL State.

FL State is 3-2 ATS as the home team this season.

FL State is 1-5 ATS in their last 6 games when at home vs Miami.

Florida State has won 7 of the last 10 meeting's between the two teams. Miami has been a profitable play in recent years, when playing Florida State.  While Miami does have 4 losses this season, all 4 have been 7 points or less.  The Hurricanes have been in every game.  The Hurricanes have had a solid defense this year allowing 22 points per game.  Florida State on the other hand has also been involved in 3 losses that have been by 7 points or less.  The Seminoles have been looking for some consistent play out of the quarterback position. Wisconsin graduate transfer Alex Hornibrook made his second start of the season in the win over Syracuse. With Florida State searching for consistency at quarterback, I'm going to take Miami to cover in this in-state matchup. However, it wouldn't be surprising if Miami outright wins, take the points.  Final score prediction, Florida State wins but Miami covers, 27-24.