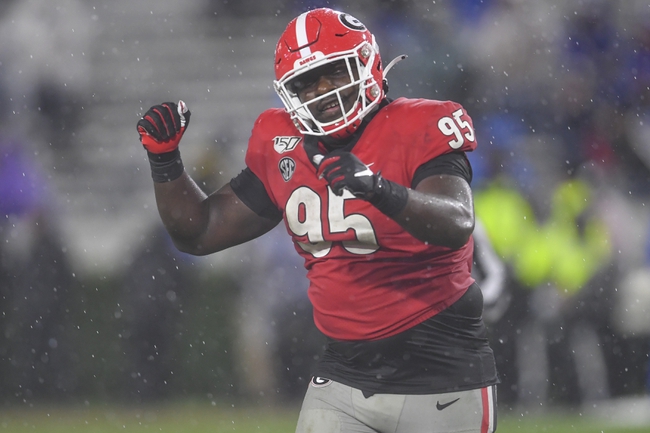 On Saturday the Georgia Bulldogs and Florida Gators will both travel to Jacksonville in a battle of two top SEC teams.  The Bulldogs come into this Saturday’s game after having last weekend off.  In their previous game, the Bulldogs defeated the Kentucky Wildcats, shutting them out by the score of 21-0.  In a game that was mostly controlled by the weather in hurricane like conditions, Georgia quarterback Jake Fromm completed 9 of 12 passing attempts for 35 yards.  With the rain being such a big factor during the game both teams were a lot more effective running the ball as compared to passing.  Georgia running back D’Andre Swift carried the ball 21 times for Bulldogs and gained 179 yards while scoring 2 touchdowns.  Georgia’s other running back Brian Herrien also benefited from the sloppy playing conditions as he ran for 60 yards on 13 attempts and a touchdown.  While they recorded their first shutout of the season, the bulldogs allowed just 17 passing yards on the day and a total of 160 rushing yards.

Georgia comes into Saturday’s game ranked 8th in the nation and have a record of 3-1 in the SEC and 6-1 overall.  On the year, quarterback Jake Fromm has thrown for 1,406 yards as well as 9 touchdowns and 3 interceptions.  Running D’Andre Swift has also been effective out of the backfield and has carried the ball 110 times for 752 yards and 7 touchdowns on the season.  Georgia has scored 36 points per game and has averaged 471.3 total yards per game.  Georgia’s defense has also played well and is allowing just 10.6 points per game and are only allowing 266.7 yards per game.

The Florida Gators come into Saturday’s game after picking up the win against the South Carolina team that has given Georgia its only loss on the season, defeating the Gamecocks by the score of 38-27.  Florida quarterback Kyle Trask threw for a career high in touchdown passes with 4, while completing 21 of 33 passing attempts and totaled 200 yards through the air.  Florida running back Dameon Pierce was the most the most productive Gator on the ground, carrying the ball 7 times for 87 yards and a touchdown.  The Gators defense was not very impressive on the day and gave up a total of 387 yards including 217 on the ground.

Florida comes into Saturday’s game ranked 6th in the country with a record of 4-1 in the SEC and 7-1 overall.  Quarterback Kyle Trask has now thrown for 1,391 yards on the year while throwing 14 touchdowns passes against just 4 interceptions while having a completion percentage of 80.3 percent.  Lamical Perine has been Florida’s leading rusher on the season and has carried the ball 100 times for 460 yards and 4 touchdowns while averaging 4.6 yards per carry.  Florida’s most productive receiver has been Kyle Pitts who has caught 35 passes for 391 yards and 4 touchdowns.  The Florida offense is scoring 32.5 points per game on the year while the defense is allowing 15.8 points per game.

In a neutral site game, here is no true home team.  Even though the game is in Jacksonville, FL, the Georgia faithful will make their way down to cheer on their Bulldogs in what will be a very good game.  For my pick, I have to go with Georgia, simply because of their defense, not only because of points allowed per game, but because they allow 53 less yards a game than Florida.  Also, Georgia has a higher points per game average.  I see Georgia winning this one in a tough, hard fought SEC battle.  Georgia wins 31-28 but does not cover the spread.