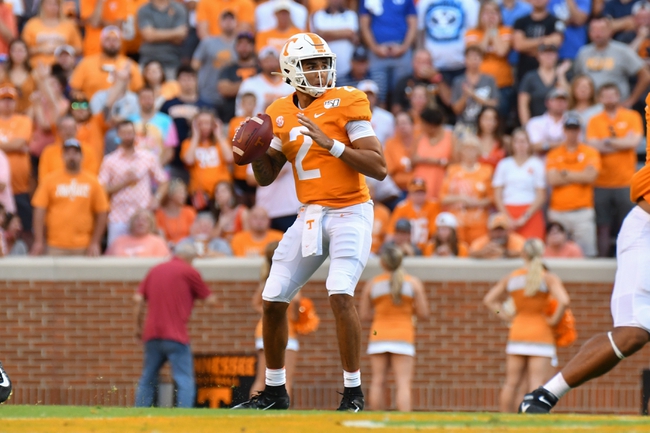 The Tennessee Volunteers will look to get back to .500 after getting their first win of the season, improving to 1-2 with a 45-0 beatdown of Chattanooga last time out. Jarrett Guarantano has thrown for 629 yards, 7 touchdowns and 2 interceptions on 65.8% passing while Ty Chandler leads Tennessee on the ground with 248 rushing yards and 2 touchdowns. Eric Gray also has 138 rushing yards for the Vols this season while Jauan Jennings leads Tennessee’s receiving group with 208 receiving yards, 12 receptions and 4 touchdowns and Marquez Callaway has 127 receiving yards this season. Defensively, Theo Jackson leads Tennessee with 18 total tackles while Henry To’o To’o has 17 tackles and Will Ignont is right behind in 3rd with 16. Shawn Shamburger has 15 tackles and a sack for Tennessee this season. As a team, Tennessee is averaging 394 yards of total offense and 33.7 points per game this season.

The Florida Gators will look to remain unbeaten after improving to 3-0 after a 29-21 road win over Kentucky in their last outing. Feleipe Franks dislocated his ankle in the win and will be out for 6 months, leaving starting QB duties to Kyle Trask, who threw for 166 yards and a touchdown. Lamical Perine leads the Gators in rushing with 120 rushing yards and 2 touchdowns while Van Jefferson leads Florida’s receiving corps with 12 grabs for 201 yards. Josh Hammond and Trevon Grimes are also in the 100-yard receiving club for Florida this season. Defensively, David Reese II leads the Gators with 24 total tackles, including 14 solo tackles while Jabari Zuniga has a team-high 3 sacks and Jonathan Greenard has 12 tackles and 2.5 sacks this season. As a team, Florida is averaging 429 yards of total offense and 32.7 points per game this season.

I get why Florida is favored as Tennessee lost two winnable home games and many feel that the Vols should also be 3-0 coming into this game. But maybe the win over Chattanooga put some confidence in the Vols, and I think Tennessee sees blood in the water with Trask leading the charge under center for the Gators. Granted, Trask was supposed to be the guy before Franks emerged as the guy in the Gators’ offense, but I just think that two touchdowns is a lot to give up with a team that still has all of their top offensive weapons in Guarantano, Chandler and Jauan Jennings. I’ll take a shot with Tennessee and the points as I see this game being decided by a touchdown or less.