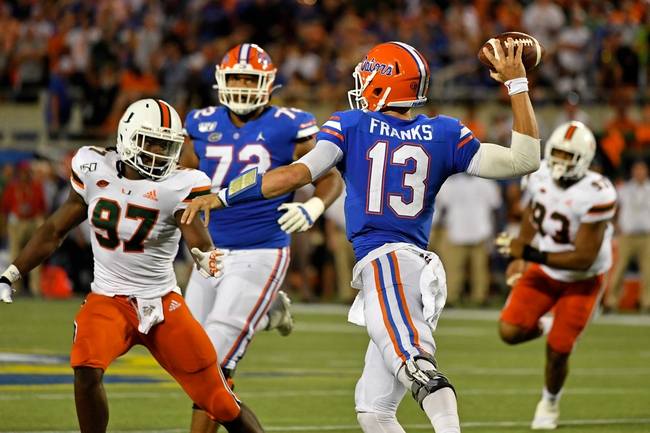 The UT-Martin Skyhawks and the Florida Gators meet in a week 2 college football matchup from Florida Field at Ben Hill Griffin Stadium on Saturday night.

The UT-Martin Skyhawks will look to build on a season-opening 42-20 victory over Northwestern State in their last outing. John Bachus III had 130 passing yards, 2 touchdowns and an interception on 8 of 20 passing while Peyton Logan led UT-Martin with 149 rushing yards and 2 touchdowns on the ground. Jaylon Moore and Colton Dowell each had a receiving touchdown for the Skyhawks while Terry Williams had a pair of receptions and a punt return touchdown. Defensively, Wanya Moton had a pair of interceptions, one of which was returned 78 yards for a touchdown as UT-Martin allowed 483 yards of total offense in the winning effort.

The Florida Gators will come into this game rested after having a week off following their season-opening 24-20 win over Miami last time out. Feleipe Franks threw for 254 yards, 2 touchdowns and 2 interceptions on 17 of 27 passing while also rushing for a touchdown while Lamical Perine led the Gators in rushing with 42 rushing yards on 10 carries. Josh Hammond led Florida with 93 receiving yards on 4 catches while Kadarius Toney had a 66-yard receiving TD and Perine caught 6 balls out of the Florida backfield for 25 yards and a touchdown. Defensively, the Gators had a field day, combining for a whopping 10 sacks, including a pair from Ventrell Miller while Jeawon Taylor led the Gators with 5 tackles in the victory.

I’d like to give UT-Martin a look here as they showed some prowess in putting points on the board in their debut. But going from Northwestern State at home to playing at Florida is a huge jump in competition, especially when the Gators have had a week off to prepare for this game. There is a bit of a look-ahead concern as Kentucky has a big road game at Kentucky after this one, but I just can’t see how this isn’t a blowout for Florida in the end. The line is thick, but I’ll lay the points with the Gators here.