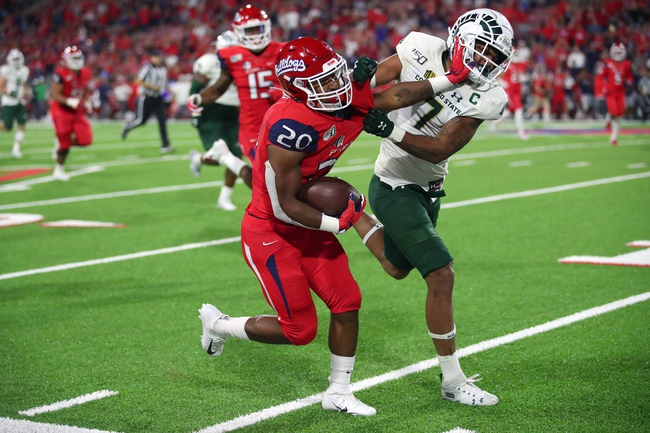 The Utah State Aggies head to Fresno State this Saturday for a game against the Bulldogs in a matchup of two Mountain West Conference teams.  In their last game, Utah State enters the game after losing 42-14 last Saturday.  Utah State quarterback Jordan Love had a monster day throwing the football as he completed 29 of 49 passes for 394 yards and a touchdown, but also threw for 3 interceptions which cost the Aggies points.  The lead receiver for the Utah State was Jordan Nathan who caught 7 passes for 133 yards but failed to record a touchdown.  Although Utah State had a big day through the air, the same can not be said about their ground game.  Gerold Bright was the Aggies leading rusher, but ran for just 66 yards on 12 carries but did record a touchdown on the day.

With the loss, Utah State fell to 4-4 on the season and 3-1 in conference play, which puts them in 4th in the Mountain Wests Mountain Division.  On the year Love has thrown for 2,014 yards and 9 touchdowns but has also thrown 12 interceptions.  Wide receiver Siaosi Mariner has been the Aggies leading receiver as he has caught 34 passes for 527 yards and 4 touchdowns on the season.  Bright has been Utah State’s leading rusher and has carried the ball 101 times for 535 yards and 5 touchdowns on the year.

The Fresno State Bulldogs welcome the Utah State Aggies after beating Hawaii in their last game by the score of 41-38.  Fresno State quarterback Jorge Reyna completed 17 of 27 passes for 188 yards and a touchdown in the win.  Jalen Cropper was the Bulldogs most productive receiver as he caught 3 passes for 62 yards but didn’t score a touchdown.  Fresno State saw a strong running performance from their ground game as Ronnie Rivers carried the ball 19 times for 103 yards and 2 touchdowns.  Reyna also added 11 carries of his own and ran for 96 yards.

On the year Fresno State is 4-4 and has a conference record of 2-2 which is good enough for 2nd place in the Mountain West’s West Division.  Reyna has now thrown for 1,843 yards, 11 touchdowns and 6 interceptions on the season.  Reyna is not only a decent passer, but he also a good runner and has ran the ball 70 times for 244 yards and 2 touchdowns on the year.  Rivers has been the Bulldogs leading rusher so far this season and has carried the ball 109 times for 553 yards and 8 touchdowns.  Fresno State’s most productive receiver has been Zane Pope who has hauled in 32 passes for 336 yards and a touchdown.