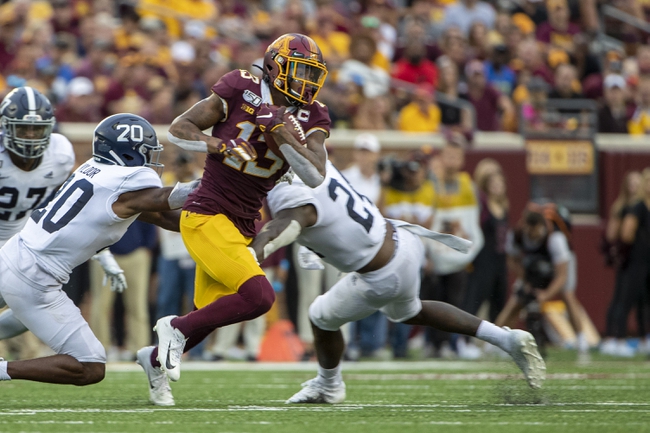 The Coastal Carolina Chanticleers are set to visit Allen E. Paulson Stadium in Statesboro, Georgia for a Sun Belt clash against the Georgia Southern Eagles. The Coastal Carolina Chanticleers come into this matchup with a 3-3 record, and they will be looking to rebound after dropping their recent home game against the Georgia State Panthers, 31-21. QB Bryce Carpenter had an efficient game through the air for the Chanticleers as he connected on 9 of his 14 pass attempts for 118 yards and 2 TDs. Sophomore WR Jaivon Heiligh was the top target for Carpenter and Coastal Carolina as he hauled n 6 catches for 73 yards and a TD.

The Coastal Carolina Chanticleers struggled on the defensive side of the ball against the Georgia State Panthers as they allowed them to score 31 points and rack up a total of 472 yards of offense. Junior LB Teddy Gallaher led the way for the Coastal Carolina defense as he racked up 14 tackles and a pass deflection. Sophomore safety Alex Spillum had a productive game from the secondary as he contributed 6 tackles and 1 interception.

The Georgia Southern Eagles come into this matchup with a 2-3 record, and they will be looking to continue their success after winning their recent road game against the South Alabama Jaguars, 20-17 in 2OT. QB Shai Werts wasn’t asked to do much through the air as he connected on 9 of his 17 pass attempts for 78 yards, but he had a big game on the ground as he racked up 102 yards. Junior RB J.D. King had a heavy workload for the Eagles as he pitched in 72 yards and a TD on 22 carries.

The Georgia Southern Eagles were good on the defensive side of the ball against the South Alabama Jaguars as they held them to 17 points and a total of 247 yards of offense. Sophomore LB Reynard Ellis led the way for the Georgia Southern defense with 6 tackles and half a TFL. Junior LB Randy Wade Jr. had a productive game for the Eagles as he racked up 5 tackles, 1.5 TFL, and 1 sack while also forcing a fumble.

Both of these teams are fighting the .500 mark, but the Coastal Carolina Chanticleers are the better offensive team in this clash which is why I will back them on the road. The Chanticleers are averaging 33.5 PPG and a huge reason for that is the success of RB Torrance Marable as he has totaled 741 yards and 8 TDs from scrimmage this year. Coastal Carolina has had a revolving door at QB, but Bryce Carpenter looks to be the answer as he has thrown 5 TDs compared to 0 interceptions. The Eagles are a primary run team which will allow Coastal Carolina to key in on that aspect of the offense, and I think this game will be a close one for that reason.