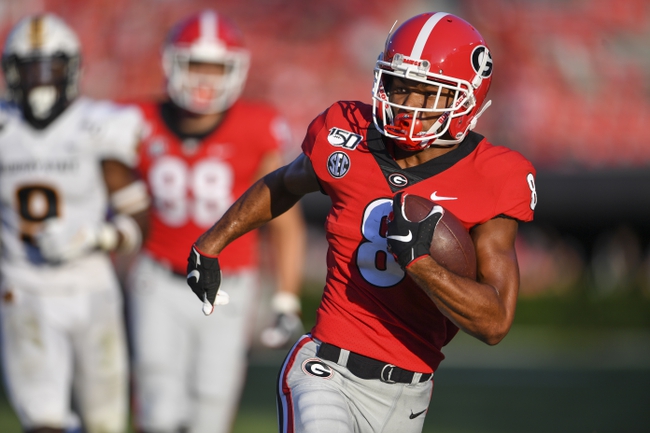 The Arkansas State Red Wolves and the Georgia Bulldogs meet in a week 3 college football matchup from Sanford Stadium on Saturday afternoon.

The Arkansas State Red Wolves will look to build on their first victory of the season coming in the form of a 43-17 win over UNLV last time out. Logan Bonner has thrown for 608 yards, 6 touchdowns and an interception on 54 of 87 passing for a 62.1% completion percentage. Marcel Murray leads the Red Wolves with 136 rushing yards while Ryan Graham has 100 rushing yards and a touchdown. Omar Bayless leads the Red Wolves’ receiving corps with 281 yards and 5 touchdowns with 16 receptions while Brandon Bowling has a team-high 17 grabs for 132 yards this season. Defensively, Jerry Jacobs leads the Red Wolves with 16 tackles while Forrest Merrill is right behind with 15 tackles and William Bradley-King has a team-high 2.5 sacks this season. As a team, Arkansas State is averaging 456 yards of total offense and 36.5 points per game this season.

The Georgia Bulldogs will look to add to their 2-0 start to the year after a 63-17 win over Murray State in their last outing. Jake Fromm has thrown for 322 yards on 25 of 34 passing for a 73.5% completion percentage with two touchdowns this season. D’Andre Swift leads Georgia in rushing with 214 yards and two touchdowns while Zamir White has 123 rushing yards and Brian Herrien has a pair of touchdowns. Eli Wolf leads Georgia with 84 receiving yards while Demetris Robertson has a team-high 6 receptions this season. Defensively, Mark Webb leads Georgia with 13 tackles while Monty Rice has 11 tackles and Nolan Smith and Channing Tindall each have a team-high 1.5 sacks this season. As a team, Georgia is averaging 520 yards of total offense and 46.5 points per game this season.

The Red Wolves and the boatload of points could be worth a look, given that Arkansas State has shown some promise offensively in the early going. However, the Red Wolves lost to an SMU team that isn’t very good, and a blowout over a bad UNLV team doesn’t move the meter much either. Georgia could take their foot off of the gas and let the Red Wolves slip in the backdoor and cover, but the Dawgs have been focused in the early going and appear like they’re on a warpath for the national playoffs and aren’t afraid to step all over any team that gets in their way. I’ll lay the points with Georgia in what should be a comfortable win and cover when all is said and done.