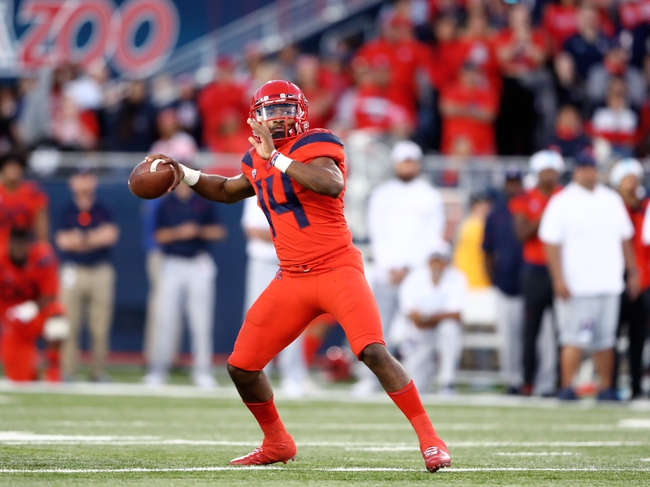 The Arizona Wildcats are coming off a five-win season and enter the second-year under coach Kevin Sumlin. The Arizona Wildcats have lost four of their last five road games. Arizona returns seven starters from an offense that averaged 31.3 points and 457.7 yards per game. Khalil Tate returns after a disappointing season, but he’s still an explosive quarterback and somebody who entered last year as a Heisman candidate. If Tate can return to the QB he was toward the end of the 2017 season when he scored 26 total touchdowns, Arizona will be fun to watch this season. Arizona returns eight starters from a defense that allowed 32.6 points and 432 yards per game. Arizona returns four of its top-five tacklers from last year, including linebacker Colin Schooler, who had 21.5 tackles for loss. Lorenzo Burns will lead the secondary after 11 pass deflections and Tony Fields II has a combined 193 tackles the last two years.

The Hawai'i Rainbow Warriors won eight games for the first time since 2010 and enter the fourth-year under coach Nick Rolovich. The Hawai'i Rainbow Warriors have won five of their last seven home games. Hawai'i returns nine starters from an offense that averaged 30.8 points and 419.9 yards per game. Cole McDonald returns at quarterback after almost 3,900 yards and 36 touchdowns, easily one of the more underrated QBs in college football. Expect that production to continue with Cedric Byrd and JoJo Ward back at wide receiver after combining for 18 touchdowns. Hawai'i returns nine starters from a defense that allowed 35.1 points and 439.7 yards per game. Hawaii returns its top-three tacklers, including star linebacker Solomon Matautia, who led the way with 92 tackles, 4.5 tackles for loss and three forced fumbles. Kaimana Padello will lead the defensive line after 8.5 sacks and Rojesterman Farris II locks up the secondary with his 11 pass deflections.

Arizona has a chance to be one of the bigger bounce back programs this season, especially if Tate returns to the player he was a couple of seasons ago. However, do not sleep on the Hawai'i Rainbow Warriors, a team that won eight games last year, and that includes three wins as a double-digit underdog. Hawaii returns majority of the key players from that roster, including a QB in McDonald who can do his fair share of matching Arizona score for score. The trip to the island also does weird things to visiting teams, as it's not an easy place to play. This feels like too many points to give Hawaii in a season opener, so I'm riding with the home Warriors.