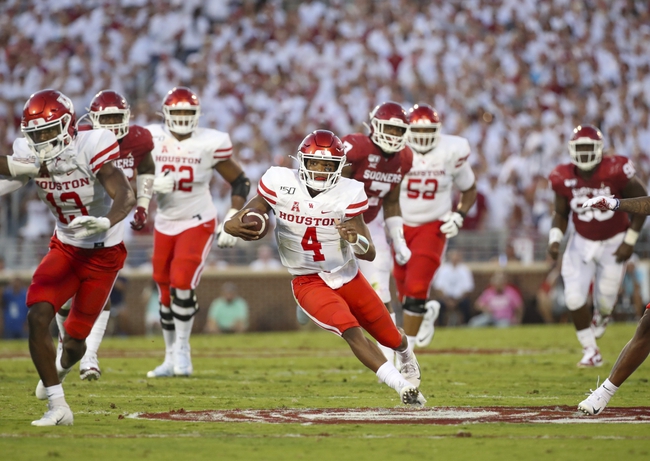 The Washington State Cougars and the Houston Cougars meet in a week 3 college football matchup from NRG Stadium on Friday night.

The Washington State Cougars will look to build on their 2-0 start to the year after a 59-17 win over Northern Colorado in their last outing. Anthony Gordon has thrown for 884 yards, 9 touchdowns and an interception on 60 of 74 passing, good for an 81.1% completion percentage. Max Borghi has rushed for 162 yards and 3 touchdowns while Brandon Arconado has a team-high 14 catches for 193 yards. Dezmon Patmon and Easop Winston Jr. each have 11 receptions with Patmon logging 175 yards and wInston Jr. registering 164 yards and 3 touchdowns. Travell Harris and Rodrick Fisher have also broken the 100-yard mark through the first two games of the season. Defensively, Marcus Strong has a team-high 8 tackles while Daniel Isom and Jahad Woods each have 6 tackles this season. As a team, Washington State is averaging 606 yards of total offense and 58.5 points per game this season while allowing 336 yards and 12 points per game on defense.

The Houston Cougars will look to build on their first win of the season coming in the form of a 37-17 victory over Prairie View A&M in their last outing. D’Eriq King has thrown for 306 yards, 3 touchdowns and an interception on 29 of 53 passing while also rushing for 102 yards and 3 touchdowns this season. Kyle Porter leads the Cougars in rushing with 160 yards and 2 touchdowns while Chandler Smith has 99 rushing yards. Marquez Stevenson leads the Cougars’ receiving corps with 10 catches for 105 receiving yards and 2 touchdowns while Keith Corbin has 93 receiving yards and a touchdown of his own. Defensively, Grant Stuard leads Houston with a sack and 22 tackles this season. As a team, Houston is averaging 394 yards of total offense and 34 points per game while allowing 514.5 yards and 33 points per game.

If we’re being honest, when I first saw this game, my mind immediately passed on picking a side and went immediately to the over, and that’s where I’m sticking. This line seems about right and could honestly go either way. But one thing that is for sure, even with turnover in Washington State’s lineup, and Houston’s tough opener and a lacklustre opponent in their second game, is that both teams can flat out score and turn this game into a track meet whenever they want to. I think both of these teams could be in the high 30s to low 40s at the minimum when this one is finished, so I’ll side with the over in what should be a fantastic offensive clinic.

The pick in this article is the opinion of the writer, not a Sports Chat Place site consensus.
Previous Pick
Boston College vs. Kansas - 9/13/19 College Football Pick, Odds, and Prediction
Next Pick
BC Lions vs. Ottawa Redblacks CFL Pick, Odds, Prediction - 9/13/19