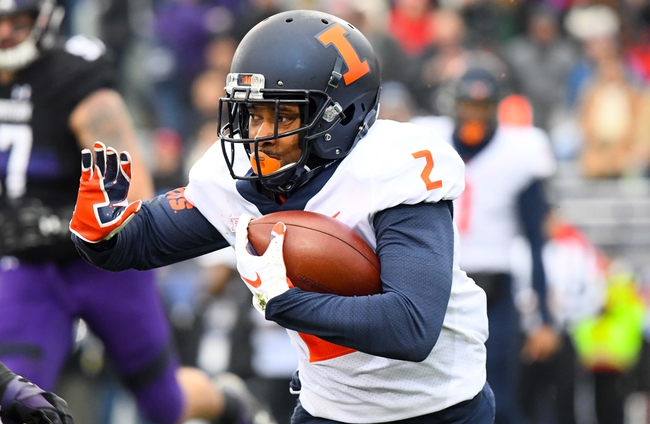 The Akron Zips have a new head coach in Tom Arth and have made just two bowl appearances since the 2006 season. The Akron Zips have lost five of their last six road games. Akron returns seven starters from an offense that averaged 18.9 points and 294.4 yards per game. Kato Nelson returns at QB after 15 touchdown passes and 303 rushing yards, while top receiver Andre Williams is back for his junior season after 649 yards and six touchdowns last season. Akron returns three starters from a defense that allowed 27.2 points and 388.1 yards per game. Linebacker John Lako returns after finishing 21st in the country with 126 tackles, while Josh Ward will lead the defensive front after four sacks, seven tackles for loss and two forced fumbles.

The Illinois Fighting Illini hope a fourth year under coach Lovie Smith will pay off, as they’ve won a combined nine games the last three years. The Illinois Fighting Illini have split their last six home games. Illinois returns seven starters from an offense that averaged 26 points and 408.7 yards per game. Illinois has to find a quarterback if this program is going to improve, but running back Reggie Corbin is coming off a 1,000-yard season and receiver Ricky Smalling has 64 catches and seven touchdowns the last two seasons despite inconsistent QB play. Illinois returns 10 starters from a defense that allowed 39.4 points and 508.3 yards per game. While the defense was downright awful last season, Illinois returns six of its top seven tacklers, including linebacker Jake Hansen, who had 95 tackles and 8.5 tackles for loss. Maybe more experience gets this unit back on track under a defensive minded coach.

The Akron Zips struggled offensively down the stretch, so I'm a little hesitant on their overall outlook heading into the season. If the Illinois Fighting Illini are ever going to win with Smith at head coach, it would be this year considering all the talent they have returning on both sides of the ball. There's no more excuses for Illinois. It's this year or changes need to take place. I'll bet on the returning production of Illinois and back a comfortable victory for the home team.