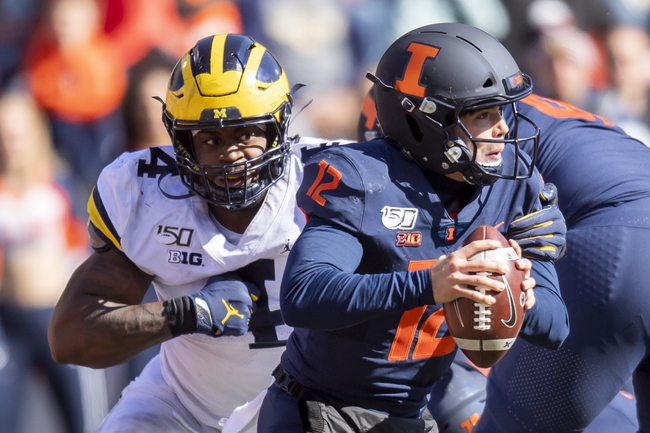 The 6th ranked Wisconsin Badgers travel to Champaign, IL for a Big Ten contest with the Illinois Fighting Illini.  Wisconsin enters this game with a 6-0 record and a 3-0 record in conference play.  Last time out the Badgers kept the Spartans of Michigan State off the board with a 38-0 victory. Illinois comes into this game with a 2-4 record overall, winless in conference play, and having lost 4 in a row.  Last week Illinois lost 42-25 to Michigan.

Wisconsin is led by quarterback Jack Coan who has completed 103 of 135 passing attempts for 1,119 yds and 8 touchdowns.  The Badgers have found a lot of success on the ground and the Badgers have the offensive line and running back Jonathan taylor to thank for that.  Taylor has 825 yds rushing and has 14 rushing touchdowns in 6 games.  Taylor also leads the team in receiving touchdowns with 4.  The badgers defensively have sacked opposing quarterbacks 23 times and have 14 takeaways.

With quarterback Brandon Peters out last week against Michigan, Matt Robinson got the start for the Fighting Illini.  He completed 16 of 25 passes for 192 yds and a touchdown. Running back Reggie Corbin has 396 yds rushing on the season, he has contributed 3 touchdowns.  Wide receiver Josh Imatorbhebhe has added 5 receiving touchdowns.

The over has hit 3 out of 4 times for the Fighting Illini when they have been the home team this year. Wisconsin is 5-1 ATS this year in all games.

Neither team has had an issue putting up points this season.  Wisconsin has been putting up points at will this season and their defense has been standing tall all season.  The Badgers defense have shut 4 teams out this season.  While the Badgers have shut 4 teams out, I think Illinois gets a couple scoring drives here at home. Why? Illinois did put up 25 points against Michigan this past week and have had a pretty decent offense. I think Wisconsin runs away with this game but Illinois is able to have a couple scoring drives to push this game over the total. Final score prediction, Wisconsin wins and covers 45-13 and the score goes over.