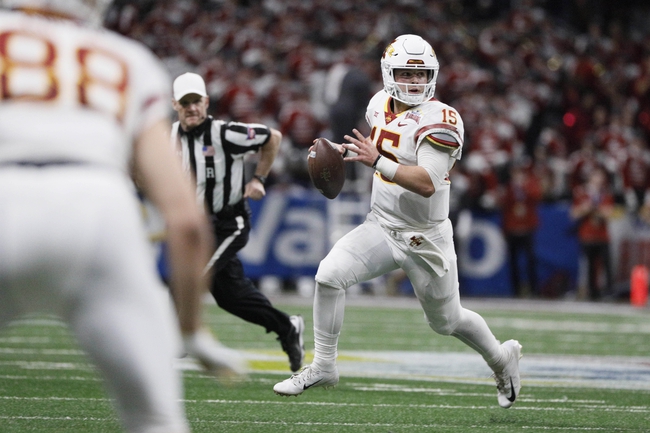 The Northern Iowa Panthers will look to build on a solid 2018 season that saw UNI be a tough out once again in the FCS, finishing the year with a 7-6 overall record, including a 5-3 record in Missouri Valley conference play. The Panthers got an invite to the national playoffs where they took down Lamar in the first round before falling to UC-Davis in the second round by a final score of 23-16. Eli Dunne is gone at QB for UNI, but the Panthers have a wealth of talent at the pivot spot, with Jacob Keller, Will McElvain, Nate Martens and Justin Fomby each have a shot at the starting job. Trevor Allen will be tasked with taking over running duties after rushing for 649 yards and 5 scores last year. Northern Iowa’s receiving corps also remains in tact as the top six receivers return including Briley Moore who led the Panthers with 39 catches for 536 yards and 4 scores last year. Defensively, two of UNI’s top five tacklers return but Chris Kolarevic will be expected to lead the team from the linebacker position while the secondary boasts a ton of starting experience with the likes of Korby Sander, Roosevelt Lawrence, Christian Jegen, Austin Evans and Xavior Williams defending downfield. As a team, Northern Iowa averaged 347.1 yards of total offense and 25.6 points per game while allowing 365.3 yards and 21.3 points per game last season.

The Iowa State Cyclones will look to build on a solid showing in 2018, finishing the year with an 8-5 overall record, including a 6-3 mark in Big 12 conference play, finishing in a tie for 3rd in the conference and receiving an invite to the Alamo Bowl, a game that the Cyclones lost to Washington State by a final score of 28-26. Brock Purdy will hope to replicate his 2018 success after leading the Cyclones from a 1-4 start to their 8-5 finish after throwing for 2,250 yards, 16 touchdowns and 7 interceptions on 66.4% passing last season. David Montgomery is gone to the NFL, and Purdy was 2nd on the team in rushing so it will be running back by committee until a true #1 emerges in the Cyclone backfield. The Iowa State receiving group lost Hakeem Butler early to the pros, but getting Arkansas transfer La’Michael Pettway gives the Cyclones hope for the coming season offensively. Deshaunte Jones finished 2nd with 43 catches last season while Tarique Milton logged 417 receiving yards. Defensively, eight starters return including JaQuan Bailey, who is widely regarded as one of the best defensive ends that the Big 12 has to offer. Mike Rose and Marcel Spears come into the linebacker spots while Greg Elsworth is back at safety after leading Iowa State with 87 tackles last season. As a team, Iowa State averaged 371.2 yards of total offense and 26.8 points per game while allowing 349.2 yards and 22.9 points per game last season.

Iowa State should rightfully be favored here being at home and probably being the better team as well as Northern Iowa’s question marks at QB. The problem is that Northern Iowa is no pushover and has enough experience to hand on the road. However, Northern Iowa had all that talent last season and still went on the road and lost by 24 at Iowa. All of Northern Iowa’s losses came on the road last season, with four of them coming by 20 or more points. I think Iowa State’s defense and Purdy leading the offense should be enough to guide the Cyclones to a win in week 1, covering the line in the process.