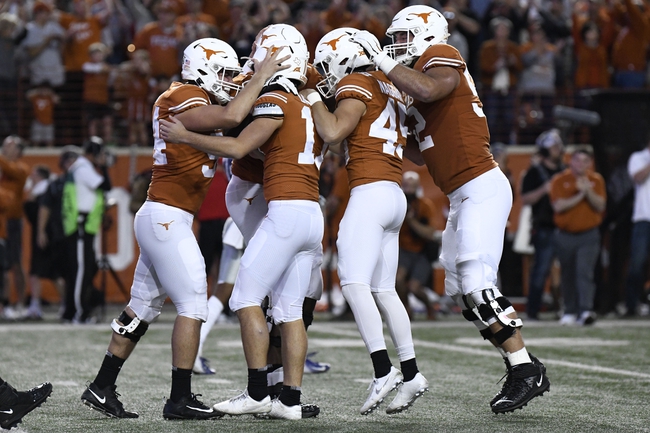 The Texas Longhorns head to the state of Iowa on Saturday for Big 12 match up with the Iowa State Cycles.  Texas enters Saturday’s game after winning their last game against the #16 ranked Kansas State Wildcats by the score of 27-24. Texas quarterback Sam Ehlinger played well as he completed 22 of 29 passes for 263 yards and 1 touchdown against 1 interception.  Running back Keaontay Ingram led the way for the Longhorns on the ground as he rushed for 139 yards and 2 touchdowns on 16 carries.  Collin Johnson led the Texas receivers on the day as he recorded 7 receptions for 110 yards and a touchdown.  The Texas defense allowed 304 total yards to Kansas State and held them to just 51 total rushing yards.

After the loss, Iowa State is 5-4 and 3-3 in conference play, which places them in 6th place in the Big 12.  Brock Purdy has now thrown for 2,849 yards and 20 touchdowns against 7 interceptions. Purdy is also a threat on the ground and has carried the ball 74 times for 251 yards and 7 touchdowns on the year. Breece Hall has led the Cyclones in rushing as he has gained 585 yards and scored 7 touchdowns on 99 carries on the season.  Deshaunte Jones has been Iowa State’s led receiver on the year as he has caught 56 passes for 604 yards and a touchdown.