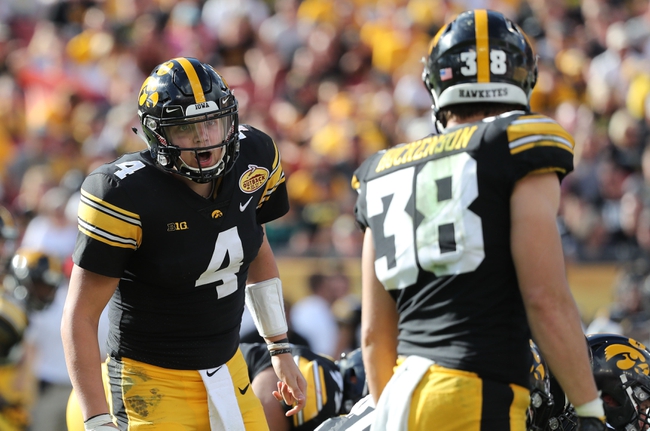 The Miami (OH) RedHawks have won five or more games each of the last three years and hope to take another step forward this season. The Miami (OH) RedHawks have split their last six road games. Miami (OH) returns five starters from an offense that averaged 28.1 points and 372 yards per game. The RedHawks have to find a quarterback and some running back depth after so many players left, but there’s a wide receiver duo in Jack Sorenson and Luke Mayock that combined for more than 1,000 yards and five touchdowns. Tight end Andrew Homer also had three touchdowns on 16 catches, so there’s some talent on the outside. Miami (OH) returns five starters from a defense that allowed 25.5 points and 368.2 yards per game. Mike Brown was the second-leading tackler with 58, and he had three pass deflections. Doug Costin returns after a six-sack season and Zedrick Raymond had six pass deflections and a forced fumble.

The Iowa Hawkeyes have won no less than seven games each of the last six years and get yet another season under coach Kirk Ferentz. The Iowa Hawkeyes have won five of their last seven home games. Iowa returns six starters from an offense that averaged 31.2 points and 375 yards per game. Nate Stanley will lead this offense once again and has over 5,000 passing yards and 52 passing touchdowns for his career. Mekhi Sargent also returns as the leading rusher, so while Iowa has to find talent to replace the losses on the outside, Iowa has some of the key positions locked up with reliable players. Iowa returns four starters from a defense that allowed 17.8 points and 293.6 yards per game. Linebacker Djimon Colbert had 52 tackles as a freshman and A.J. Epenesa is one of the best pass rushers in the country, as he racked up 10.5 sacks, 16.5 tackles for loss and four forced fumbles. Geno Stone holds down the secondary after four interceptions and three pass deflections last season. The Iowa Hawkeyes will once again be a factor in the Big Ten and could surprise some people.

The Miami (OH) RedHawks have question marks, but they a lot of talent at the receiver position and could stretch this Iowa defense just enough to keep this game interesting. As impressive as the Iowa Hawkeyes look offensively, they're never the type of team that plays at a fast pace and blowouts don't happen often. This is also an in-state game, so bragging rights are on the line and you know the RedHawks will be up for this contest. The Iowa Hawkeyes are obviously the more talented team and should win, but the line is a bit too steep for my taste in a season opener between two respectable teams.