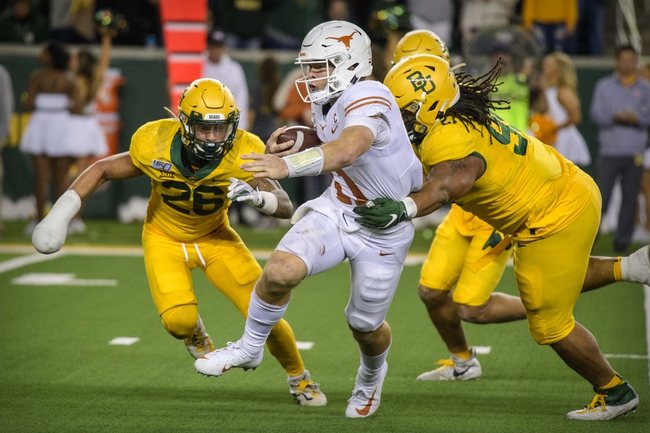 The Baylor Bears visit Memorial Stadium in Lawrence, Kansas for the Big 12 regular season finale against the Kansas Jayhawks on Saturday afternoon. A week after a disappointing home loss to Oklahoma ended their bid for an undefeated season, Charlie Brewer and the Bears won their home finale 24-10 over Texas on Saturday to clinch a spot in their first Big 12 championship game.

Brewer, the junior quarterback, completed 16 of 25 passes for 221 yards with a touchdown, and ran 18 times for 75 yards and another score. The Bears quarterback has thrown for 2,753 yards, 19 touchdowns and 5 interceptions on the season. His top target this year has been Denzel Mims, who has 57 catches, 892 yards and 11 touchdowns. As a team, Baylor has averaged 33.9 points per game.

Kansas is currently mired in a 3-game losing streak, falling to Iowa State by 10 last week in Ames, Iowa. The Jayhawks took a 31-27 lead on a 40-yard touchdown pass from Carter Stanley to Stephon Robinson, Jr. in the 4th quarter, but the Cyclones responded with two touchdowns that Brock Purdy was responsible for, and completed the 41-31 win. Stanley threw for 328 yards and 3 touchdowns in the defeat.

Kansas snapped a 4-game losing streak against Texas Tech back on October 27, but since have dropped games to Kansas State, Oklahoma State, and Iowa State this past weekend. Their two other wins on the year have come against Boston College and Indiana State. Stanley has led the way under center, throwing for 2,569 yards, 24 touchdowns and 8 interceptions in 11 games.

Baylor is clearly the better team here. They’re guaranteed a Big 12 Championship spot, and they’ll get a chance to exact some revenge against Oklahoma in that game. If they don’t look ahead and focus on the Jayhawks they could win by 30+. If they get caught looking ahead, it’ll be a lot closer, but they’ll still win. Final Score Prediction, Baylor blows out Kansas, 48-17.