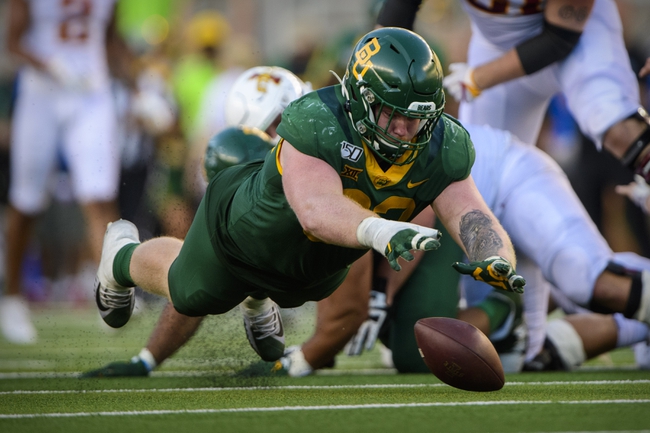 The Baylor Tigers visit Bill Snyder Family Stadium in Manhattan, Kansas on Saturday to play a Big 12 showdown against the Kansas State Wildcats. Baylor remained unbeaten at 4-0 following its 23-21 victory over Iowa State. John Mayers booted a field goal of 38 yards with just 21 seconds remaining for his first field goal at Baylor lifting the Bears to the win after they had squandered a 20-point fourth quarter lead.

Charlie Brewer leads the Bears with 972 yards passing and 10 touchdowns. The leading rusher for Baylor is John Lovett with 238 yards and one touchdown. Denzel Mims leads all receivers with 355 yards and five touchdowns, while Tyquan Thornton has 236 yards receiving and two TDs. Clay Johnston leads the Bears in tackles with 37.

Kansas State slipped to 3-1 after losing to Oklahoma State on Saturday 26-13. Skylar Thompson led the Wildcats in the loss with 118 yards passing. The Wildcats had big problems converting on third down failing to do so on 12 of 13 attempts. Kansas State rushed for just 126 yards while averaging 280 on the ground entering the game.

Baylor has had problems covering the number in this matchup failing to cover 4 of the last 5 played at Kansas State and 7 of the last 10 overall between the two. Kansas State has covered 6 of its last 7 at home and 6 of its last 8 versus an opponent with a winning record. Baylor has failed to follow up ATS wins as the Bears are 2-7 ATS in their last 9 following a win ATS. Final Score Prediction Kansas State Wildcats win and cover ATS 27-23