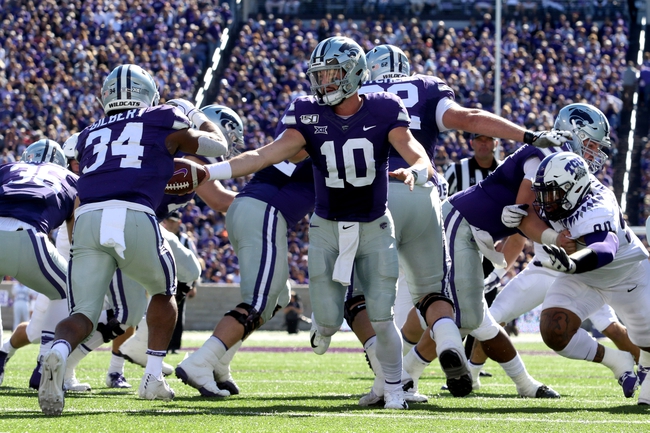 The Oklahoma Sooners come into Saturday’s game a perfect 7-0, after dominating Western Virginia to a score of 52-14. Alabama transfer and Heisman hopeful, quarterback Jalen Hurts lead the team in both passing and rushing. In the air, Hurts completed 16 of 17 passes for 316 yards and 3 touchdowns. Hurts also dominated on the ground, running for 75 yards on 10 carries and 2 touchdowns before ending his one man show and giving way to backup quarterback Tanner Mordecai in mop up time.

Oklahoma remains one of the only undefeated teams left in Big 12 as they continue to play at an extremely high level. Jalen Hurts has been unstoppable this year throwing for 1,758 yards along with 17 touchdowns against just 3 interceptions. As effective as Hurts has been in the air, he has also dominated on the ground, running for 639 yards and 8 touchdowns.  When other members of the Oklahoma offense are involved, wide receiver Ceedee Lamb has caught 28 passes for 610 yards and 10 touchdowns.

Kansas State enters Saturday’s match up with a record of 4-2, defeating TCU 24-17 in their last game. Quarterback Skylar Thompson was the most productive Wildcat on the day, leading his team in passing and rushing. Thomson completed 11 of 23 passes for 2 touchdowns. Thompson also ran 10 times for 68 yards and ran for a touchdown which gave the Wildcats the lead with just 2:45 left in the game.

Kansas State has been strong defensively this season, only allowing 18.7 points per game while the offense has struggled at times in their effort to put points on the board. Besides blowouts in the first two games of the season against much weaker opponents, Kansas State’s biggest margin of victory is 7 which they accomplished against TCU and Mississippi State. Now the Wildcats offense has to try and get going against an Oklahoma defense that has only given up 20.3 points per game and has an electric offense on the other side of the ball.