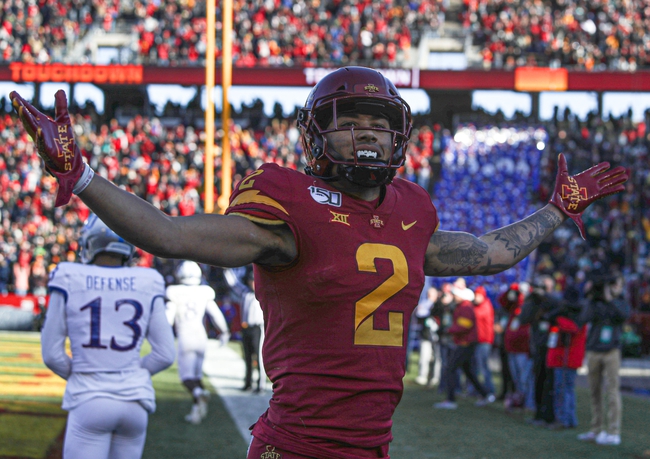 The Iowa State Cyclones visit Bill Snyder Family Stadium in Manhattan, Kansas for a Big 12 regular season finale with the Kansas State Wildcats on Saturday. This past weekend, Brock Purdy threw for 372 yards and four TDs -- including the game-clinching one on fourth-and-goal from the 4 -- and Iowa State rallied to beat Kansas 41-31 on Saturday and clinch its third straight winning season.

The Cyclones are on a mini winning streak, besting their last two opponents, following a modest two-game slide. One of those games included a narrow one-point defeat to Oklahoma, 42-41. Purdy has thrown for 3,575 yards in 11 games, including 26 touchdowns and 9 interceptions. Deshaunte Jones has been Purdy’s top target this season, collecting 70 receptions and 822 yards. Tight end Charlie Kolar has added 649 receiving yards and 7 touchdowns.

Kansas State is fresh off a 30-27 victory over Texas Tech this past weekend, which included a 100-yard kickoff return for a score from Joshua Youngblood. Wildcat quarterback, Skylar Thompson, tossed for 246 yards and 2 touchdowns and Blake Lynch connected on three field goals to aid in the K-State victory.

The Wildcats’ win over the Red Raiders snapped a 2-game losing streak that was preceded by a 3-game winning streak, their second such run of the season. Thompson has thrown for 2.134 yards, 12 touchdowns and 4 interceptions this season. He’s also rushed for an additional 364 yards and 10 visits to paydirt. His main receiving weapon has been Dalton Schoen, who has 34 receptions, 568 yards and 4 touchdowns.

Both schools are looking for their 8th win of the season, and then will wait for bowl seeding and watch conference cohorts Oklahoma and Baylor battle for Big 12 supremacy. I’ll take the points and side with the home team, who beat the Sooners on their home turf a few weeks back. Final Score Prediction, Kansas State covers ATS and wins outright, 30-28.