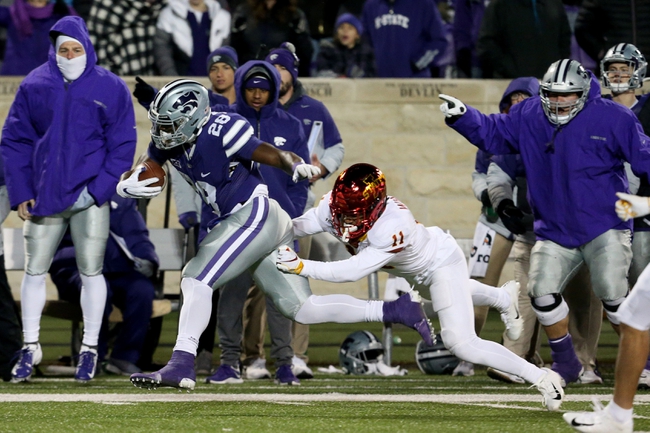 The Kansas State Wildcats face off against the 23rd ranked Navy Midshipmen in the Liberty Bowl Memorial.  The Wildcats are (8-4), after ending the regular season with a win over Iowa State, 27-17.  The Midshipmen are (10-2), coming off a 31-7 win over Army.

The Wildcats were led this season offensively by quarterback Skylar Thompson.  Thompson passed for 2,191 yds on 167 completions, while throwing 12 touchdowns and 5 picks.  Thompson also had 10 rushing touchdowns.  Running back James Gilbert contributed 698 yds rushing, while finding the end zone 6 times.  Dalton Schoen was Thompson's favorite target, hauling in 35 receptions for 567 yds, and 4 touchdowns.  Denzel Goolsby led the Wildcats defensively in tackles, with 56.  Wyatt Hubert had 7 sacks on the season.

The Midshipmen were led on offense by dual threat quarterback Malcolm Perry.  Perry had 43 completions for 1,027 yds and 6 touchdowns and 3 interceptions.  Perry rushed for 1,804 yds on 267 attempts, while hitting pay dirt 21 times.  Jamale Carothers added 712 yds out of the backfield, while finding the end zone 14 times.  Mychal Cooper was the only Navy receiver on the year to have double digit receptions.  Cooper had 15 catches for 355 yds and 2 scores.  Defensively, Navy was led in tackles by Diego Fagot with 93.  Jacob Springer recorded 8 sacks on the season.

Wildcats are 6-1 ATS in their last 7 games overall.

Midshipmen are 5-0 ATS in their last 5 bowl games.

Navy while being ranked, did not have an overly tough schedule.  The toughest opponent the Midshipmen played was Notre Dame, a 32 point loss to the Fighting Irish.  The Wildcats while not playing a tough non-conference schedule, showed their strength in Big 12 play.  Kansas State had notable wins over: TCU, Oklahoma, and Iowa State.  The Midshipmen had one of the better offense's in the country all year, averaging over 38.5 points per game, ranking 12th at the FBS level.  As you could imagine, Navy averaged the most yds rushing per game at the FBS level, totaling over 363 yds per game.  Kansas State has a solid defense, a defense that ranks 27th in fewest points allowed (21.50).  The Wildcats are giving up over 150 yds on the ground on average.  Navy does not throw the ball all that often, but the Wildcats have a top 50 defense in fewest passing yds allowed.