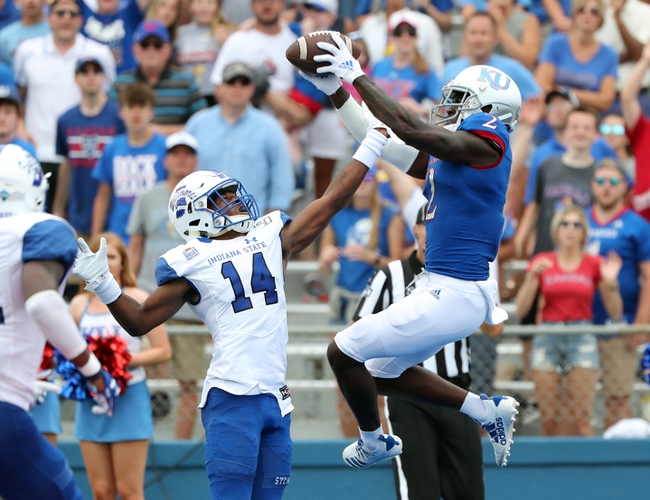 The Coastal Carolina Chanticleers will look to bounce back after dropping their season opener at home against Eastern Michigan by a final score of 30-23. Fred Payton threw for 304 yards, 2 touchdowns and 4 interceptions on 29 of 43 passing while CJ Marable had a team-high 49 rushing yards on 18 carries while also leading Coastal with 7 receptions for 84 yards and a touchdown out of the backfield. Jaivon Heiligh had 6 grabs for 76 yards and Ky’Jon Tyler added 6 receptions of his own while Shadell Bell had a touchdown grab for the Chanticleers in the win. Defensively, C.J. Brewer and Teron Jackson combined for a sack while Silas Kelly led the Chanticleers with 6 tackles in the losing effort.

The Kansas Jayhawks will look to build off of a 24-17 win over Indiana State in their season opener last time out. Carter Stanley threw for 241 yards and 2 touchdowns on 20 of 29 passing while Khalil Herbert led the Jayhawks in rushing with 88 rushing yards on 17 carries. Andrew Parchment led KU’s receiving group with 8 receptions for 121 yards while Daylon Charlot had 6 receptions for 79 yards and a score and James Sosinski had a touchdown grab as well in the win. Defensively, Hasan Defense had a pick-six to open Kansas’ scoring while Jeremiah McCullough added an interception of his own and Azur Kamara, Darrius Moragne and Dru Prox each had a sack with Prox leading Kansas with 8 tackles in the win.

Kansas should definitely be favored at home, and Les Miles is one heck of a coach. But it’s a bit alarming to me that Kansas almost did what Kansas normally does on the football field and choke up in games that they should win when they had to rally for a late touchdown to beat an FCS team and a solid one at that in Indiana State. Coastal Carolina probably would’ve had a different outcome if the interception didn’t end up undoing all of their hard work, but I definitely think there’s some promise for the Chanticleers in the Sun Belt this season. All in all, I think Kansas wins this game but I think the Chanticleers will learn from their mistakes enough to keep this one within single digits, so I’ll take a shot at Coastal Carolina and the points in this one.