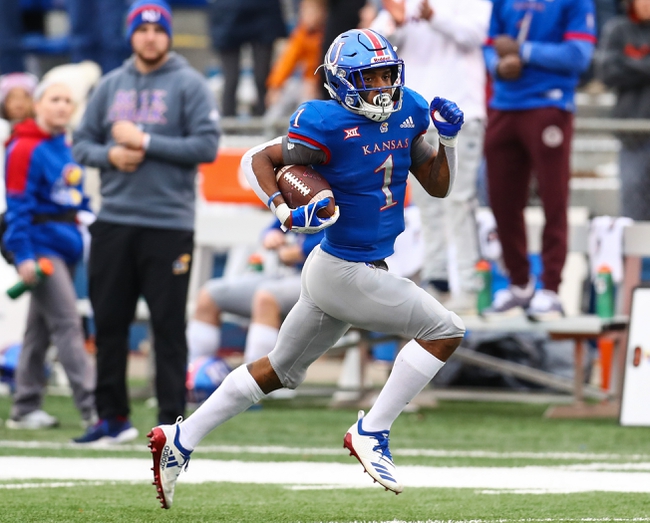 The Indiana State Sycamores and the Kansas Jayhawks meet in week 1 college football action from Kivisto Field in Lawrence, KS on Saturday afternoon.

The Indiana State Sycamores come into the 2019 season looking to build on an impressive 2018 campaign that saw the Sycamores go from an 0-11 mark the year prior to a 7-4 record last season, still missing out on the playoffs, but finishing the year in the FCS top 25 rankings. The Sycamores had a solid showing, winning five straight games to finish the season as well as a pair of 3-point losses in conference play, including a 54-51 shootout against South Dakota State, an FCS playoff semi-finalist and the #3 ranked team in the country. Ryan Boyle is back under center after throwing for 62.4% passing with 12 touchdowns and 3 interceptions as well as 1,627 yards. Boyle also logged 610 rushing yards but should get help from Titus McCoy who received some solid reps in the backfield last season. The Sycamores complete receiving corps returns, led by Dante Hendrix who logged 47 grabs for 681 yards and 4 scores last season. Defensively, Jonas Griffith returns as one of the FCS’ premier linebackers, logging 247 tackles across the last two seasons, while Clayton Glasco is also back in the linebacking group while Denzel Bonner and Kaelub Newman will be back to bolster a solid Sycamore secondary. As a team, Indiana State averaged 402.7 yards of total offense and 31.7 points per game while allowing 430.3 yards of total offense and 28.1 points per game last season.

The Kansas Jayhawks come into this season looking for their first winning season since 2008 under new head coach Les Miles after finishing 3-9 last season, the Jayhawks’ 9th straight season with 3 or fewer victories. Thomas MacVittie gets his second crack at being an FBS quarterback after being recruited by Miles and signing last December. MacVittie went from being QB to being sent to special teams duties in two years at Pitt, so MacVittie is hoping for another crack at some playing time here. Pooka Williams Jr. is back at running back after racking up 1,125 rushing yards and 7 touchdowns last season. There are a lot of question marks in the Kansas receiving group, but the group has also been lauded with the potential of being very good this season with former Alabama wideout Daylon Charlot as well as JUCO transfers Andrew Parchment and Ezra Naylor II. The defense is also undergoing an overhaul, losing five of last season’s starters to graduation while also switching to a new defensive scheme under defensive coordinator D.J. Eliot. The KU secondary boasts some of the team’s top talent, with Mike Lee at safety as well as Hasan Defense, Bryce Torneden and Corione Harris. As a team, Kansas averaged 350.8 yards of total offense and 23.8 points per game while allowing 418.7 yards and 30 points per game last season.

Indiana State is going to be a team to watch in the FCS this season and are definitely capable of pulling off an upset here given Kansas’ struggles to win games. And losing an opening week game to Nicholls State to start last season doesn’t do much for my confidence here. However, this is an important game in terms of changing the culture of KU football with Les Miles at the helm. If he’s going to be the kind of coach that can change the direction of a program the way that many are tagging him to be, the Jayhawks can’t start with a loss to an FCS team, even if Indiana State is one of the better subdivision teams in the country. I think the Jayhawks ride that potential to an opening week victory, so I’ll lay the points with Kansas here.