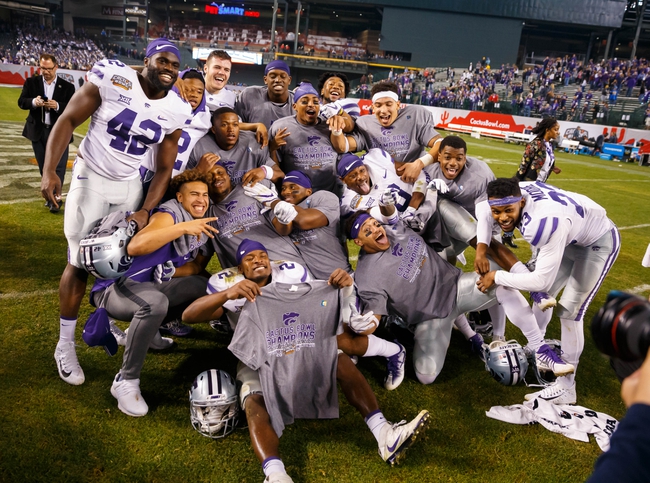 The Kansas State Wildcats are riding high into a matchup with their inner state rivals, the Kansas Jayhawks.  In their last game, Kansas State defeated the formerly #5 ranked Oklahoma Sooners by the score of 48-41.  Quarterback Skylar Thompson completed 18 of 28 passes for 213 and didn’t throw a touchdown pass or an interception.  However, the key for Thompson wasn’t through the air, but on the ground.  Thompson ran 13 times for 39 yards and 4 touchdowns.  Running back James Gilbert ran for 105 yards on 13 carries and a touchdown of his own.  The Kansas State defense allowed 497 yards, including 395 through the air, but were able to force a fumble and an interception.

On the year, Kansas State is now 5-2 with a record of 2-2 in Big 12 conference play.  Dual threat quarterback Skylar Thompson has now thrown for 1,207 yards, 7 touchdowns and 1 interception on the year while running 51 times for 204 yards and 7 touchdowns.  The Wildcats are led in rushing by running back James Gilbert who has rushed 100 times for 558 yards and 5 touchdowns.  The receiving core is led by Dalton Schoen who has 23 receptions for 322 yards and 3 touchdowns on the year.  Kansas State is scoring 32.7 points per game and giving up 21.9 points per game.

The arrival of Les Miles ignited the Kansas Jayhawks fan base and sent shockwaves through college football.  In their first year under Miles, the Jayhawks have a record of 3-5 and a 1-4 record in conference play.  In their last game, Kansas beat the Texas Tech Red Raiders at home, 37-34 as the Jayhawks scored 17 points in the 4th quarter on their way to the win.  Quarterback Carter Stanley completed 26 of 37 passes for 415 yards, 3 touchdowns and an interception.  Running back Pooka Williams Jr led the way for Kansas on the ground, rushing 21 times for 69 yards.  Stephon Robinson Jr caught 6 passes for 186 yards and 2 touchdowns, while Andrew Parchment caught 7 passes for 109 yards and a touchdown.  The Kansas defense allowed a total of 483 yards on the day, including 271 through the air.

Despite their 3-5 record, the Jayhawks are playing competitive football for the first time in a long time.  On the year, Stanley has thrown for 1,900 yards including 19 touchdown passes and 5 interceptions.  Williams Jr. has also been solid on the ground carrying the ball 136 times for 704 yards and 3 touchdowns.  Parchment is the leading receiver for Kansas and has caught 42 passes for 614 yards and 6 touchdowns on the season.  On the year, Kansas has scored 27.8 points per game and allowed 32.8 points per game.

It wouldn’t be a total surprise to see Kansas State let up after such a big win last Saturday, especially against such a talented Kansas passing game that averages 237.5 yards a game through the air.  But, at the same time, the Kansas defense is averaging giving up 473.5 yards a game and will be able to be exposed by a quarterback like KSU’s Skylar Thompson.  I think this game will be close, but Kansas State will pull out the win on the road.  Kansas State wins 35-24 and covers the spread.