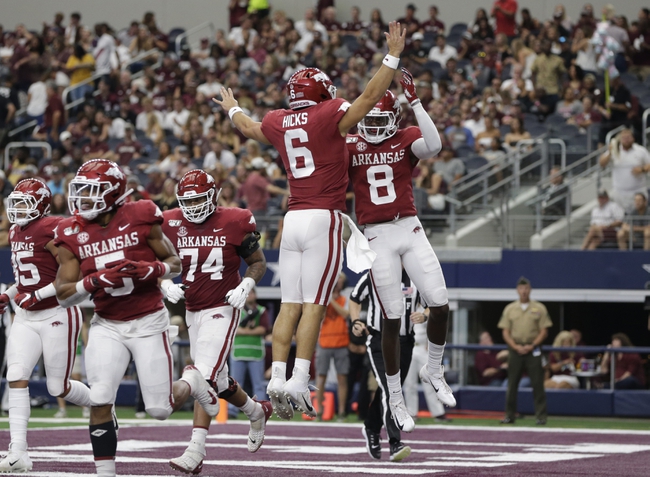 SEC Conference rivals will square off on Saturday night, when the Arkansas Razorback travel to Kroger Stadium to face the Kentucky Wildcats. The Razorbacks have dropped consecutive games and have just two wins on the season. Last time out, Arkansas was unable to punch in the final drive and fell against Texas A&M by a 31-27 final score.

QB Ben Hicks came in relief and threw for 188 yards and a touchdown to spark the Arkansas offense. Rakeem Boud carried the ball 18 times for 89 yards in a losing effort for the Razorbacks.

The Kentucky Wildcats lost starting QB Terry Wilson for the season with an injury and are winless in conference play. Last Saturday, Kentucky managed just 212 yards of total offense during a 24-7 road loss against South Carolina. The Wildcats turned the ball over twice and allowed the Gamecocks to have a 21-9 advantage in first downs.

Kentucky QB Seth Smith posted a woeful 11-for-30 completions for just 90 yards and an interception. Christopher Rodriguez scored the only touchdown for the Wildcats with just over two minutes remaining.

These two schools have not met since 2012, a lopsided 49-7 home victory for Arkansas. Kentucky leads the all-time series with a 4-3 record, but have scored just 41 points total in three SEC losses so far this season. Take the under on Saturday. Final Score Prediction, Kentucky Wildcats 27-20.