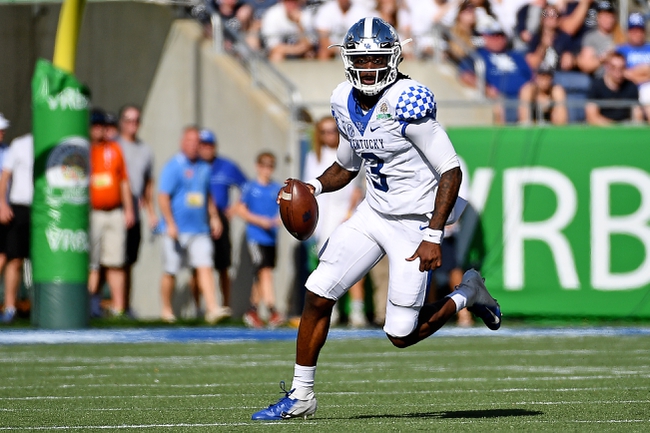 The Toledo Rockets and the Kentucky Wildcats meet in week 1 non-conference college football action from Kroger Field in Lexington, KY on Saturday.

The Toledo Rockets come into the 2019 season looking to build on a decent 2018 season that saw the Rockets finish with a 7-6 overall record, including 5-3 in MAC conference play to finish in a three-way tie for 2nd in the MAC West. The Rockets received an invite to the Bahamas Bowl, losing out to FIU by a final score of 35-32. Mitchell Guadagni and Eli Peters will duke it out for the starting role under center, with the hope that Guadagni is fully recovered from his broken collarbone that ended his season prematurely last year. The Rockets bring back one of the better running back tandems in the MAC in Bryant Koback and Shakif Seymour, with Koback leading Toledo with 917 yards and 14 rushing scores last season while Seymour had 565 rushing yards and 5 scores. Danzel McKinley-Lewis and Desmond Phillips will be tasked with taking over lead roles in Toledo’s receiving corps. Defensively, the Rockets weren’t good at all last year, and now Toledo has to rebuild the defense after losing six starters, including five of the top seven tacklers from a year ago. Khalil Robinson is back in Toledo’s secondary after finishing second on the team with 69 tackles last season while Jordan Fisher and Erik Davis will battle for reps in the linebacking corps after Fisher finished 4th on the team in tackles last season with 59 tackles. As a team, Toledo averaged 444.2 yards of total offense and 40.4 points per game while defensively, the Rockets gave up 432.3 yards and 30.5 points per game last season.

The Kentucky Wildcats will attempt to follow up a very successful 2018 season that saw the Wildcats put forth their best season in 40 years after finishing with a 10-3 record, including a 5-3 record in SEC play, finishing in a tie for 2nd in the SEC East division. The Wildcats received an invite to play in the Citrus Bowl, a game that saw Kentucky take down Penn State by a final score of 27-24. Terry Wilson is back at QB after throwing for 1,889 yards, 11 touchdowns and 8 picks on 67.2% passing while the Wildcats will look to fill the enormous void left by leading rusher Benny Snell Jr. Asim Rose is expected to be atop Kentucky’s depth chart at running back after averaging 6.2 yards per carry last season. Lynn Bowden Jr. will be once again tasked with leading Kentucky’s receiver group after leading the team with 67 catches for 745 yards and 5 touchdowns through the air last season. Defensively, Josh Allen is gone after leading Kentucky with 88 tackles and 17 sacks last season, as is six other starters from arguably one of the best defenses that UK has ever had. Kash Daniel will be expected to lead the Wildcats on the defensive side of the ball at the linebacker position, while Davonte Robinson and Jordan Griffin will see plenty of time in the secondary. As a team, Kentucky averaged 361.5 yards of total offense and 26.6 points per game last season while on defense allowing 332.8 yards and 16.8 points per game, the 6th-lowest scoring defense in the country last season.

I don’t think I’m trying to back either of these two teams in this one as there has been a lot of loss on both sides of the field. However, I actually think Toledo will be okay as they bring back both of their starting quarterbacks from last year and still have a solid 1-2 punch at running back. Kentucky on the other hand has a decent mobile quarterback and some solid receivers, while also missing some key defensive pieces. The difference for me is that Toledo has a much, much easier schedule to deal with than Kentucky, with this being the hardest game on the Rockets’ schedule this season while Kentucky has to deal with the SEC, enough said. I just don’t know how the Wildcats are going to cope with the loss of the likes of Snell and Allen from this year’s team, and as such I think the Rockets can keep this one fairly close if not pull off the first upset of 2019, so I’ll take a shot with Toledo and the points here.