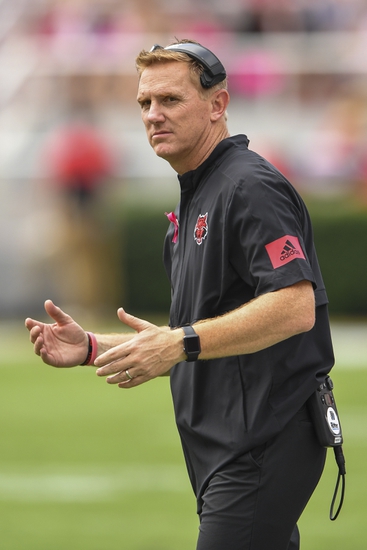 On Saturday the Arkansas State Red Wolves travel to the Louisiana to play the University of Louisiana at Monroe Warhawks in a battle in the Sun Belt conference.  In their last game, the Red Wolves were victorious against Texas State, dominating and winning by the score of 38-14.  Quarterback Layne Hatcher has a good day through the air, completing 18 of 28 passes for 158 yards and 2 touchdowns without throwing an interception.  Wide receiver Omar Bayless was Hatcher’s favorite target, as Bayless caught 7 passes for 77 yards and caught both of Hatcher’s passing touchdowns.  Running back Marcel Murray also had a decent day on the ground as he carried the ball 22 times for 114 yards and 2 touchdowns of his own.  The Arkansas State defense was just as good as their offense, allowing just 227 total yards, including just 81 yards on the ground.

On the year, Arkansas State is 4-4 with a conference record of 2-2.  On the year, Hatcher has thrown for 1,253 yards and 12 touchdowns against 6 interceptions. Running back Marcel Murray has had a decent season, running the ball 90 times for 472 yards and 3 touchdowns.  Omar Bayless has had a huge season for the Red Wolves, catching 60 passes for 1,070 yards and 12 touchdowns on the year.  On the year, the Red Wolves have scored 32.5 points per game and allowed 35.4 points per game but will continue to try and improve on their numbers against the ULM Warhawks.

The Louisiana-Monroe Warhawks come into Saturday’s game against the Arkansas State Red Wolves after being crushed by #24 Appalachian State in their last game in which the Warhawks lost, 52-7.  Warhawks quarterback Caleb Evans was shut down all day, completing just 9 of 19 passing attempts for 75 yards, no touchdowns and throwing an interception.  The Warhawks running game didn’t do much better as lead rusher Josh Johnson only ran for 77 yards on 13 carries.  With Evans struggling under center, the wide receiving core for ULM struggled as well as their lead receiver Zach Jackson was only able to catch 2 passes for 33 yards on the day.  The Warhawks defense was thrashed and not only gave up 52 points, but 572 yards in the game.

On the year, the Warhawks are 3-4 but are 2-1 in conference play which is good enough to be tied with the University of Louisiana for first placed in the Sun Belt West division.  On the year, quarterback Caleb Evans has thrown for 1,472 yards, 10 touchdowns and 5 interceptions.  Running back Josh Johnson has ran for 789 yards on 119 carries and scored 6 touchdowns on the ground.  In terms of yards, he most productive receiver for the Warhawks has been Markis McCray who has caught 26 passes for 327 yards and 1 touchdown. ULM is currently scoring 27 points per game while allowing 37.3 points per game.

Although ULM is at home, I don’t see them coming out of this one with a victory.  The Red Wolves offense played extremely well in their last game and will be looking to continue that style of playing moving forward.  While both teams are close to putting up equal numbers on the stats sheet, Arkansas State just looking like the better of the two teams.  Arkansas State Red Wolves win 35-31 and covers the spread.